Students at the United Arab Emirates University (UAEU) are increasingly being recognised for their outstanding work in different research fields.

One of them, Ms. Azza AlShamsi, was recently awarded for her work as team leader of a research project within the Human Resources and Management space.

She and her team, who are students in the field Geographic Information Systems (GIS), created a solution for an issue that many people across the UAE face on a daily basis – finding a parking spot in traffic. After studying a number of creative and innovative concepts in Spring 2021, the students developed an application called Car Service Application (CSAP) to help solve the difficulty. They focused on three specific features, namely high quality, low cost and an ease of usage.

Although the team is currently still working on the project, by attempting to find companies that will help fund the app, they were recently awarded for their research at the 8th Annual Research Competition, organised by the Abu Dhabi University.

After sending their idea through to the organisers, they were asked to proceed to the competition’s next stage by posting a video on YouTube further explaining their project. They were announced as the winners via Zoom and were part of a number of other UAEU students who took part in the competition in different fields. “I was interested in the field because it is a problem that all people face,” she explained. “It costs money and time when you look for parking – you could have an appointment that you arrive late for because of this, so it is a problem that maybe no one sees but our app can help solve it.”

The team of three continued working on the project throughout the summer, as they started contacting a number engineers to try and develop the idea even further and make it more creative. They also plan on using new technology involving Artificial Intelligence (AI).

Although the idea stemmed from a graded project in class, the students received great support from their teacher, Khaula Al Kaabi, a UAEU Professor in Geography. AlShamsi spoke highly of her, highlighting her encouragement towards her students to enroll in additional classes outside of the University and researching courses that would help them develop their idea further. “Because we are geography students, so we do not necessarily know about how applications work,” AlShamsi said. “So we took many courses that helped us prototype the app and our teacher’s assistance allowed us to think outside the box, rather than just work on the geography or the mapping side of the research.” 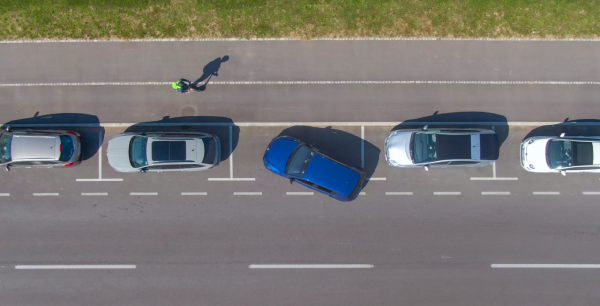 She said the University was extremely encouraging, in terms of helping them take part in the competition and following through with their project to ensure they develop their idea to its fullest. AlShamsi said her teacher did not solely see her research as a university project, rather, she spoke of it as a “brilliant idea” that deserved to be pursued.

The UAEU also helped the team of students to find a proposal, while its technical team provided them with valuable ideas and feedback. Prof. Al Kaabi helped them develop their idea on the ground, firstly, by assisting them in implementing the project and secondly, by working towards having them use the University’s carpark for their work. Prof. Al Kaabi’s reputation precedes her, as she has helped many other students in their research projects, by assisting them in entering competitions. “She is a great teacher,” noted AlShamsi, who expressed great pride when she and her team received the award last month and felt gratitude towards the University for helping them achieve their goal. “We were proud because we only saw it as a project, and it made us think that we can achieve a lot more and we can create and develop something that will help the community and the UAE.”
Her aim is to help save local residents money and time and, in that context, to focus more on enjoying their life, rather than spend it looking for parking spots. Her project also falls in line with the UAE’s vision of focusing on efficient transportation.

With one and a half years left at the University, AlShamsi is now looking forward to her research work, and remains constantly in contact with Prof. Al Kaabi, who has exerted great dedication towards her students by working beyond her University hours.

For AlShamsi, the UAEU is the perfect example of a stellar university as it thoroughly helps its students. “There is no need to travel abroad to study because we have one of the best universities in the world,” she concluded. “You can get a great degree and work anywhere with it afterwards because it really is one of the best out there and the first one across the country”.