UAEU opens the Emirates Center for Happiness Research, the first of its kind in the UAE and the Middle East

UAEU opens the Emirates Center for Happiness Research, the first of its kind in the UAE and the Middle East 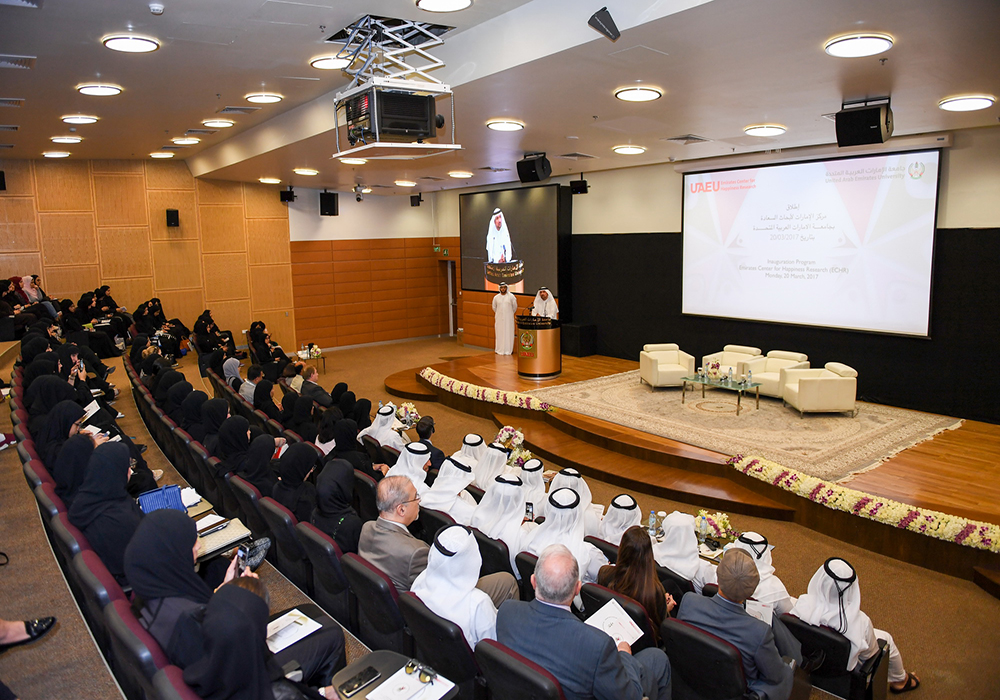 Under the patronage of United Arab Emirates University Chancellor His Excellency Dr Ali Rashid Al Noaimi, the university opened the Emirates Center for Research on Happiness on Monday 20 March, 2017.

The event took place in collaboration with the National Happiness and Positivity Program, the first of its kind in the UAE and the Middle East, in conjunction with the celebration of the International Day of Happiness, which falls on March 20 every year.

The opening ceremony included an exhibition displaying works of art by UAEU students which embodied the values of happiness and positivity in society from a creative human perspective, and reflected the philosophy of happiness of UAEU students.

During the ceremony, UAEU Vice Chancellor Professor Mohamed Albaili planted a rose for happiness, with the participation of the university community and students.

The Minister of State for Happiness Her Excellency Ohood Al Roumi was unable to attend the event in person but sent  a supportive and encouraging video message, Also in attendance were the Provost and Deputy Vice Chancellor for Research and Graduate Studies Professor Ghaleb Al Hadrami Al Breiki, UAEU Secretary General Professor Faeqa Hilal, UAEU Executive Director of Happiness and Positivity Dr Ahmad Al Zaabi, and Director of Education and Senior Scholar at the Positive Psychology Center at the University of Pennsylvania, and Executive Director of the World Association of Positive Thinking and Happiness in the United States of America Dr James Pawelski, as well as other experts in the field of happiness and positivity research, and other guests from the university community.

Her Excellency Ohood Al Roumi endorsed the UAEU’s initiative in choosing such a distinctive anniversary to officially announce the opening of the Emirates Center for Research on Happiness. She said, "Today we celebrate happiness as a value and a goal for people, and a basic need for humans around the globe, as important as any of the other needs in life. The UAE was established on happiness and has chosen it as an approach since the era of the founding fathers. Today, led by the President of the United Arab Emirates His Highness Sheikh Khalifa bin Zayed Al Nahyan, may Allah save and bless him, and directed by Vice President, Prime Minister and Ruler of Dubai His Highness Sheikh Mohammed bin Rashid Al Maktoum and followed by His HighnessSheikh Mohammed bin Zayed Al Nahyan, Crown Prince of Abu Dhabi and Deputy SupremeCommander of the UAE Armed Forces, the UAE is moving forward to promote and spread the values of a positive lifestyle among all sectors of society. In light of the clear understanding in our country of the importance of happiness as a science, which has foundations, methods, applications and scientific benchmarks, we have established a partnership with the United Arab Emirates University, a prestigious national university, to launch the Emirates Center for Happiness Research, to practically embody our ongoing efforts to support and enhance happiness and positivity in society, through expanding specialized scientific studies, and observing the happiness indicators, besides monitoring trends and visions of society, so as to enhance our sponsorship of the scientific content of happiness in the UAE, and to contribute to scientific findings worldwide.”

The minister expressed gratitude and appreciation to the UAEU for its initiatives and efforts in support of the government directives to achieve the goals of the National Happiness and Positivity Program. She said she looked forward to witnessing the first scientific research from the Emirates Center for Happiness Research in confirmation of the pioneering leadership of the United Arab Emirates on the subject of happiness and positivity globally.

Professor Albaili added, “I am delighted that the United Arab Emirates University is host to the first and only nationally accredited happiness center at state level. Through skills development, professional progression, advisory services and support of the national policy by providing scientific evidence, we will contribute to achieving the vision of the government to spread happiness among the community. The opening of this center supports the UAE Vision 2021 and supports a unified Emirati identity, dedicated to making happiness a catalyst for economic advancement and production through scientific research, and to emphasize the keenness and attention of our Wise Leadership to the promotion of happiness for everyone among UAE society."

Director of Education and Senior Scholar in the Positive Psychology Center at the University of Pennsylvania, and Executive Director of the World Association of Positive Thinking and Happiness in the United States of America Dr James Pawelski  gave a presentation on the definition of happiness and positivity and shared the global vision of Vice President, Prime Minister and Ruler of Dubai, His Highness Sheikh Mohammed bin Rashid Al Maktoum, may Allah save and bless him, on happiness.

He also praised the efforts of the Ministry for Happiness, and suggested ways the Emirates Center for Research on Happiness and the Positive Psychology Center at the University of Pennsylvania in the United States can collaborate. He illustrated factors that promote happiness and positivity and suggested joint initiatives with UAEU to accomplish research and scientific projects to promote the concept and practice of happiness throughout the world. He also discussed the launching of the first program to grant masters and doctoral degrees in the fields of happiness and positivity.

In a panel discussion about happiness and positivity, administered by UAEU Center for Public Policy and Leadership Director Dr Ateeq Jakka Al Mansoori, a number of topics were addressed. UAEU Head of the Department of Psychology Dr Ahmed Al Najjar presented a scientific paper titled Happiness as a Positive Practice, in which he reviewed the definition of the concept of happiness in life and positivity and steps towards it, and discussed the elements of positive transformation into happiness.

He talked about intellectual foundations and basic values of positive harmony and respect, praise and emotional principles that lead to the establishment of positive relationships which can be fulfilled through the application of some of the positive practices of honoring and gratitude.

Dr Al Najjar announced the launch of the first website of free education on the Internet to bring happiness and positivity in the Year of Giving. The website provides knowledge and training of creative and positive thinking and problem-solving under the administration of the UAEU Department of Psychology.

The Emirates Center for Happiness Research consists of the Unit of Research and Happiness and the Unit of Capacity Building and Advisory Services. The center will have a board of trustees supervised by a director general.  The center will be assisted by specialists from the academic departments at the university, and will collaborate with several international institutions and specialists inside and outside the country.