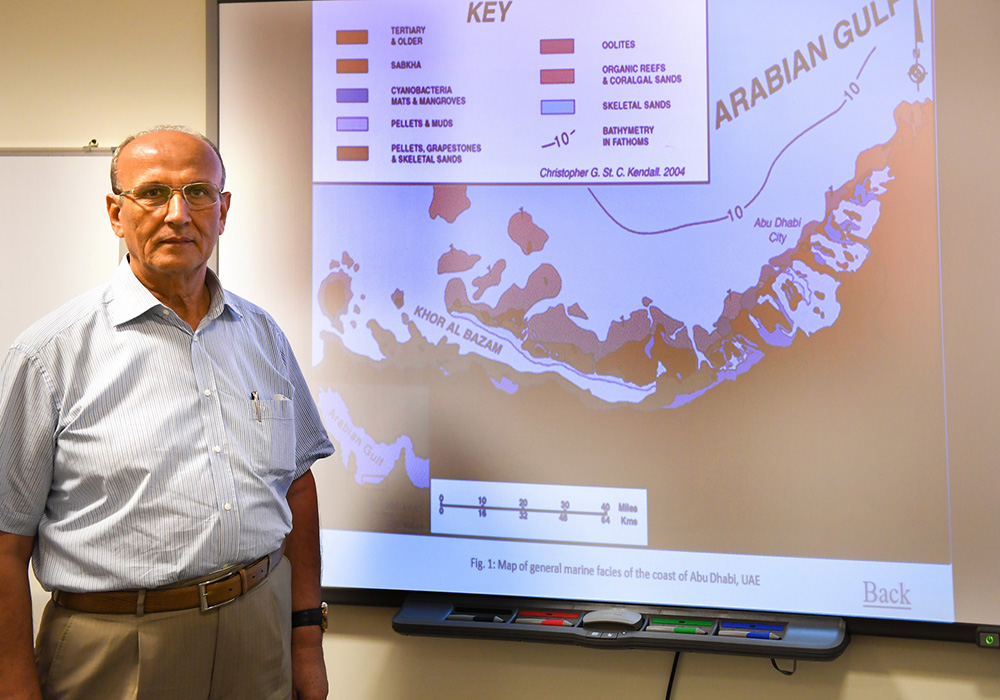 The waters of the UAE may have the potential to provide a new source of clean energy for the nation and enable it to develop its salt-exporting industry, research conducted at United Arab Emirates University (UAEU) has claimed.

A study by Dr. Samir Abu-Eishah, a Professor of Chemical Engineering at the Al Ain-based university, has analyzed the capacity of the lagoons around the UAE’s coastline to produce energy that could be stored in salinity-gradient solar ponds (SGSPs) and used for various purposes, including water distillation and the production of “solar salt”.

According to a recently-published study by the UAEU faculty member, the climate of the UAE and the Arabian Gulf create “favorable conditions” for the nation to become “self-sufficient in salt and visible on the global salt-exporting map”, as well as opening up a new avenue for generating environmentally-friendly energy.

In his research paper, Dr. Abu-Eishah explained how most of the UAE’s coast consists of a series of hypersaline lagoons surrounded by sabkhas – or salt flats – and the nation’s aridity, combined with its solar radiation, rainfall, and seawater salinity levels, create opportunities to be capitalized upon. To carry out his study, he collected and analyzed samples from various sabkhas of different depths and at different times of the year, which indicated areas where SGSPs could be used as “heat sinks” due to their high concentrations of salts, and sodium chloride in particular.

“The SGSP technology uses high-density saltwater to store thermal heat,” said Dr. Abu-Eishah in his paper. “The pond absorbs solar heat, but a portion of it is trapped within its ‘Lower Convective Zone’, which has high salt concentration and density.

“This thermal energy can be harnessed at a later time for processes that require water temperatures between 50-90 degrees Centigrade.”

Dr. Abu-Eishah explained that cold water from an SGSP can be fed to a water distillation unit, while the hot water can provide this unit with an energy source, with the result being the production of “high-quality drinking water”. The hot water can also be used to drive low-temperature energy-generating turbines, and in areas such as salt production, aquaculture, water supply, and the dairy, grain, and fruit and vegetable canning industries.

“In salt-affected rural areas such as the UAE, solar pond technology could be a competitive source of heat for local industries, since saline water and salt is locally available,” he said.

“Heat from solar ponds is expected to be competitive with the use of liquefied petroleum gas and electricity in rural areas. There are no major issues with the development of SGSPs, as their prospects have been well-studied and documented, and if the need for freshwater becomes substantial, they could prove to be a beneficial energy resource for adding energy as well as heat to the water desalination process.”

In his study – which also includes an economic case for the solar pond process, and was supported by UAEU’s Research Affairs office and the university’s Master’s program in Environmental Sciences - Dr. Abu-Eishah outlined that SGSPs are becoming “increasingly attractive’ as the costs associated with them are reducing and they support nations in cutting greenhouse gas emissions, while they also allow neighboring agricultural land that was previously too salt-heavy to be brought back into productive use. “The project has a positive impact on the environment for both the short- and long-term,” he said.

“The pond utilizes solar energy, thereby eliminating fossil fuel-based emissions as a source of atmospheric contamination. For the long-term, the technology makes use of renewable solar energy and is sustainable. The technology itself is environmentally-friendly and, if implemented, would serve as a sustainable energy source for the desalination of saline waters and the production of high-quality table salt and other salts.

“SGSP technology is expected to have several economically and environmentally advantageous returns for the UAE, with the most significant being environmentally-friendly renewable fuel.”