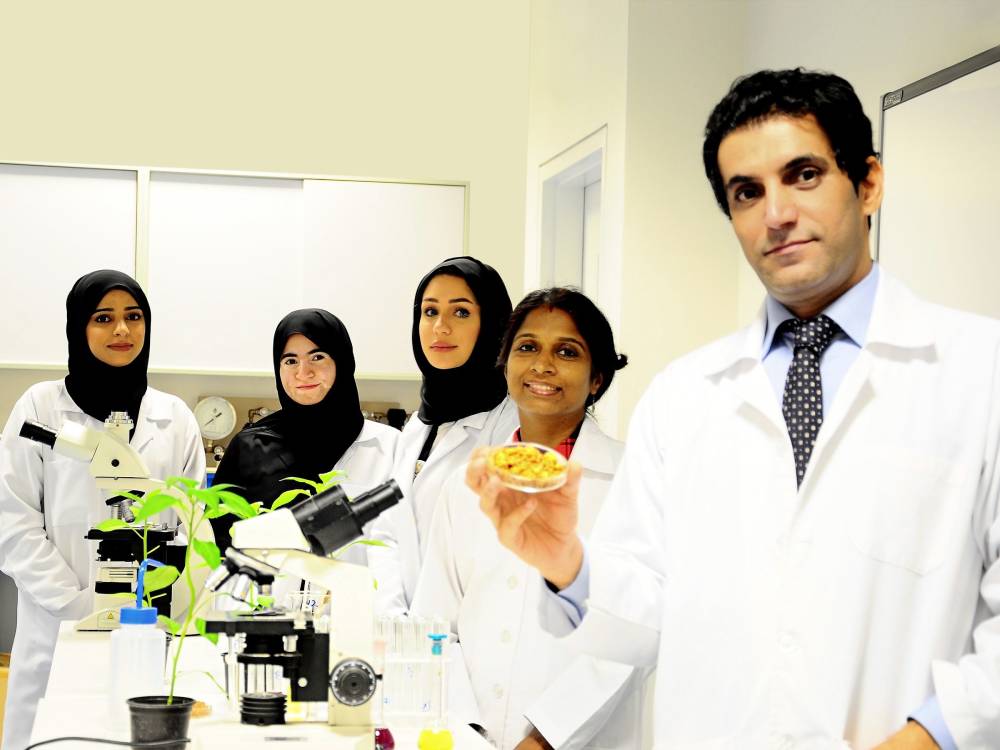 A research team from the College of Food and Agriculture (CFA) at the United Arab Emirates (UAEU) has discovered a new fungus, with beneficial properties, known as Dominilia Emiratia. It is a species of arbuscular mycorrhizal fungi. These fungi live in plant roots and protect the host from disease, dehydration and tough weather conditions. The discovery was made while evaluating micro-organic life in the sands around Sweihan in Abu Dhabi Emirate. The research team published these finding in ‘Botany’, an international journal.

This is the result of concerted efforts by the UAEU research team and researchers from the West Pomeranian University of Technology in Poland. They isolated the fungus and identified its physical and genetic features. They chose to name the fungus Dominikia Emiratia as it was discovered in the UAE.

Professor Mohammed Al Baili, Vice Chancellor of UAEU, stressed the importance of this discovery, one of many made at UAEU. As the national university, UAEU strives to serve both local and wider society. He explained that the research team is now working to develop this discovery up to the production stage. By carrying the name of the country, this discovery enhances the reputation of the UAE and UAEU in terms of scientific research and academia. It is to be hoped that such discoveries encourage further innovation and exploration.

He added that, “this discovery contributes to the UAE’s green economy which seeks to reach many sustainable goals for the country. UAEU is working in tune with the nation’s agenda and that of UAE vision 2021 to achieve a more sustainable environment.”

Professor Bhanu Chowdhary, Dean of the CFA, praised the research team, and was quoted as saying that, “the CFA is proud of the cooperation between researchers and students. The college is looking forward to utilizing the fungus in commercial applications very soon.” He added that discovering a new fungus and giving it the country’s name adds to the reputation of the UAE in terms of scientific research. He continued, “there are several benefits of this newly discovered fungus. One of the most important is that it acts as an effective medium to transfer food to plants and in doing so protects plants from disease, and enhances their sustainability in tough environmental and weather conditions.”

Dr. Mohammed Nasser Al Yehyaei, the chief researcher, explained that the discovery is of great significance as the fungus can cope with the environmental conditions in the UAE. The team will conduct further studies to discover the best methods for producing commercial quantities of the fungus in order to use it to increase crop productivity in a more sustainable way. This will also allow for the avoidance of chemical fertilizers. Dr. Al Yehyaei expressed his pleasure that CFA students were involve as this shows that education is not just restricted to classrooms, but includes laboratory work and field trips. The students can be proud of conducting research that contributes to the development of society.

Layla Al Dhahiri, a student on the team said that, “participation in this discovery was an amazing experience for me and the whole research team. It also helped me to decide the topic for my M.A. thesis, which will be on identifying the fungus and it interaction with local medicinal and aromatic plants.”

Two more students - Salama Al Khouri and Azza Al Kaabi – were also proud to have taken part in the discovery of a beneficial microorganism, which can be utilized to develop food production. Research assistant, Dr. Kutty, further explained that the discovery of this fungus opens up new avenues for more research on both its characteristics and physiological features.