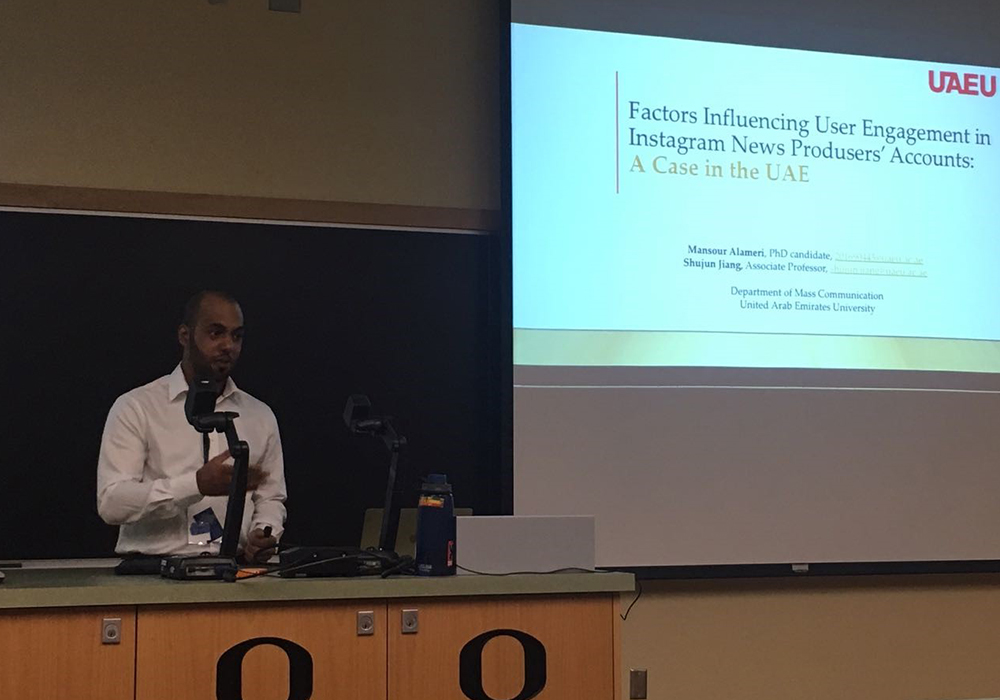 The emerging social media phenomenon and its impact on official news outlets in the UAE was presented during a prestigious conference in the United States by Mansour Al Ameri, a 31-year-old PhD student at the United Arab Emirates University (UAEU).

The young Emirati, who is currently studying mass communication, was initially struck by the dominance of non-official news outlets on social media, compared to traditional leading newspapers such as Al Bayan, Al Khaleej and Al Ittihad. “Social media itself led these official newspapers to be behind in the sharing of news information, and news articles don’t come from official newspapers but from non-professional social media accounts,” he said. “It’s very interesting to me why they are dominant in social media and probably, the main exposure of news is from these three outlets, which are UAE Barq, NetAD and 3meed_news.”

Mr Al Ameri’s paper, entitled “Factors influencing User Engagement in Instagram News’ Producer’s Accounts: A case in the UAE”, was one of 50 or so which were presented at the International Association of Mass Communication Research (IAMCR) conference at the University of Oregon from June 20 to June 24. His research fell under the category Audience, and ways in which an audience can be influenced. “Nowadays, with the issue of media itself, it’s very interesting to see how media shapes the world and how the representation of current events, whatever they may be, is shaped by media, so it’s an area I cannot ignore,” he said. “I presented my paper and the major findings of the research, which are some of the factors that play a role in attracting an audience in social media, by analyzing these three non-official accounts, because they are mainly non-professional journalists who are very familiar with social media features.”

His findings revealed four factors that play a role in influencing an audience:

“I am very happy about this research and I want to investigate more on social media itself in the future and come up with a strategy of how we can adapt to any social media platform,” Mr Al Ameri said. “Instagram in the UAE is gaining popularity now for news outlets but somehow, I want to find a common factor that can suit every social media platform so that, whatever comes up, there is a rule of thumb for how news officials can incorporate or employ these factors to gain popularity.”

Dr Shujun Jiang, Mr Al Ameri’s supervisor and Associate Professor of Mass Communication at the university, spoke of the large gap between official and non-official news accounts on Instagram. “People are more exposed to those non-official news channels, so we did a content analysis for those non-official news accounts, checked their posts, their type, number, and topics, to find some factors that will influence the user engagement, which means people’s likes, comments and interactions with news accounts,” she said. “Instagram as a platform gives a lot of interactive features for the audience so it’s something we can measure. So, in theory, we also found there is a type of news accounts nowadays called ‘produsers’, because they are new creators in today’s journalism or news industry, and they’re also users.”

Such accounts, which are heavy social media users, were familiar with the audience’s needs. “Whatever content they create, they are closer to the audience,” Dr Jiang said. “This concept isn’t just in the news industry but also in business with ‘prosumers’, which are not just producers but also consumers – they consume their own product which is why they know what we need, and they customize products to make them more attractive to their customers. We want to improve the performance of official news media in the UAE and our research will benefit the news industry in the UAE and contribute to the country’s society.”