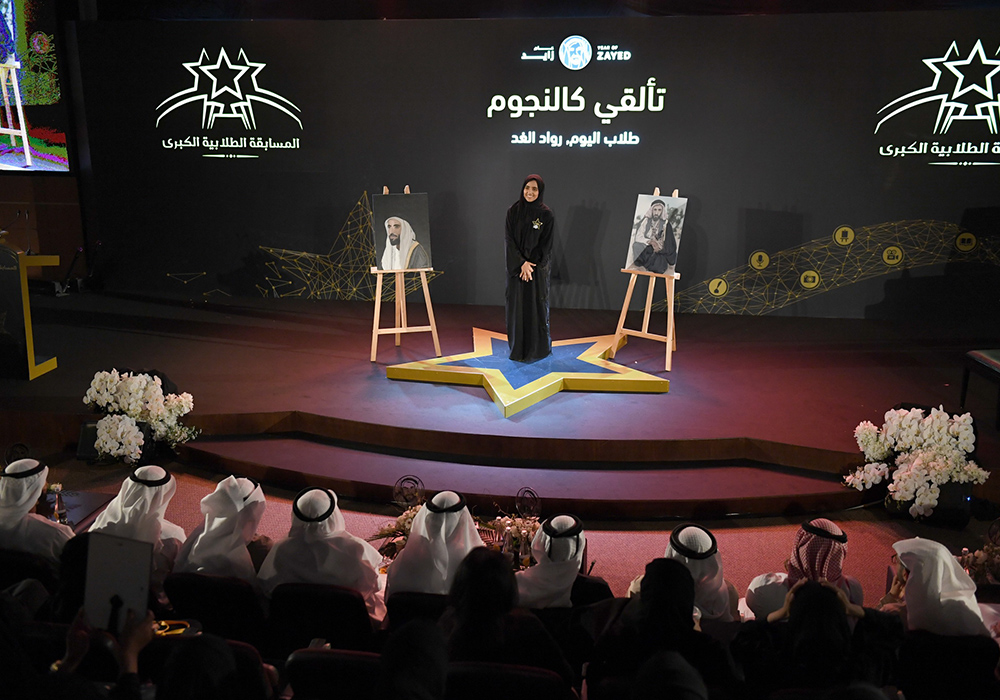 Hasnaa Al Derei won the first place in the Student Great Competition, in the final episode of the competition held on 20th March 2018. The final episode, titled ‘the Year of Zayed’ was attended by H.E. Professor Mohamed Albaili, UAEU Vice Chancellor and a number of UAEU leaders, faculty and students.

Professor Albaili explained that the level of performance showcased by the contestants in the finale was of a high standard and in line with the UAEU’s status and its prominent role in focusing on student talents, investing in their capabilities and preparing them as the leaders of the future.

Addressing the student contestants, Professor Albaili stated, “You are great models of youth who are capable of facing challenges and expressing their thoughts in a fine, and civilized manner”.

In the final episode, each of the six finalists showcased her unique talent, through which they conveyed a message to the late founder of the UAE, Sheikh Zayed bin Sultan Al Nahyan. In addition, the musician and composer, Eiman Alshamsi, performed an operetta named ‘the Year of Zayed’ and the poet, Majid Alkhatri, recited a piece of poem addressed to the UAE leaders.

Al Derei, who presented her digital drawings of the late Sheikh Zayed, expressed her delight and pride on winning the first-place AED 15,000 prize.

“Obtaining the golden opportunity to return to the competition was a great motivation for me to show the best of my talent in the finale,” said Al Derei. “I would like to thank my beloved mother for being great support to me, and the UAEU for giving me the opportunity towards excellence and creativity”

The Student Great Competition is a competition organized by UAEU to discover talented students and was held over six weekly episodes. At beginning of the competition, 300 students participated with their art and literature talents.