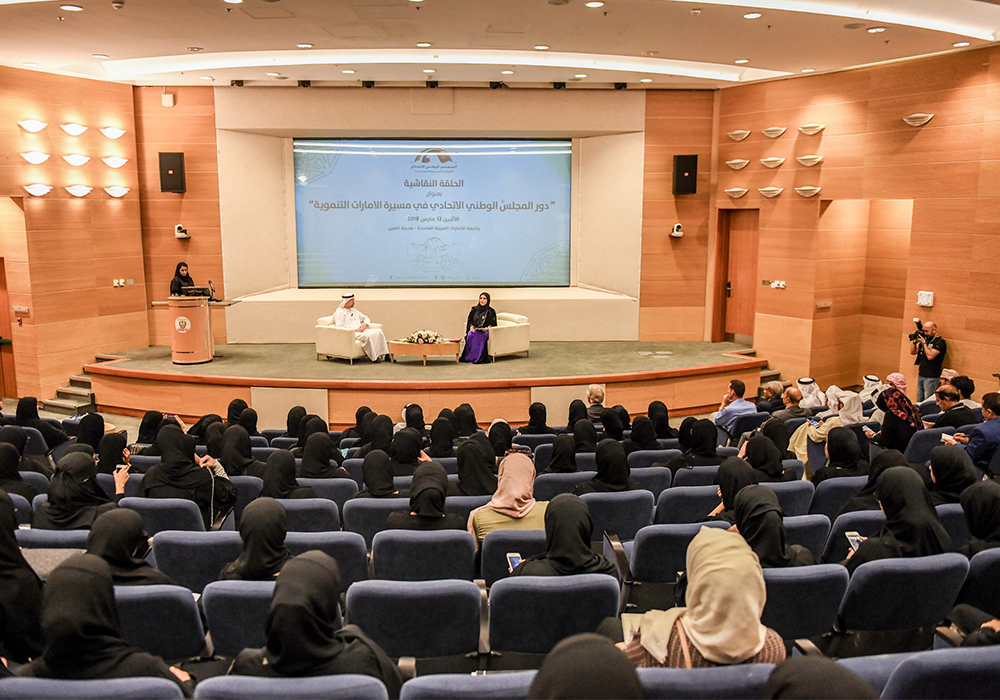 As part of its social initiatives during the Year of Zayed, the National Federal Council (NFC) held at the United Arab Emirates University (UAEU), Al Ain on Monday 12th March 2018 a seminar titled ‘Role of the Federal National Council in the UAE Development’ which was attended by a large number of UAEU students and academicians and media reporters.

The seminar was presented by H.E. Azza Suliman bin Suliman, Member of NFC, and H.E. Ahmed Shabeeb Al Dhaheri, General Secretary of NFC, aimed to showcase the council’s role in promoting Emiratization, education and research as well as other UAE sectors including health, social, services, housing and economic sectors. The seminar also presented its strategy for 2016-2021, its legislative, supervisory and political competencies as well as its achievements at the local and international levels.

H.E. Al Dhaheri commended the UAEU and the significant role it plays in developing UAE education, and preparing national qualified cadres in line with high international standards. He asserted the importance of cooperation among the UAE’s institutions, contributing to achieving the inclusive development as part of the 2021 vision and to achieve the competitive goals of the UAE Centennial 2071.

H.E. Al Dhaheri explained the development stages of the UAE parliament life since the council’s inception on 12th Feb. 1972, praising the support given to the council during its establishment by the late Sheikh Zayed bin Sultan Al Nahyan. This support is continued by H.H. Sheikh Khalifa bin Zayed Al Nahyan, UAE President, as per the political program he announced in 2005 regarding enabling the council to exercise its constitutional competencies.

He added that this event came as part of the council’s activities and to implement the parliament’s strategy of 2016-2021, launched by H.H. Sheikh Mohammed bin Rashid Al Maktoum, Vice President and Prime Minister of the UAE, Ruler of Dubai, aiming to achieve excellence in UAE’s various sectors. It is also part of the council’s social initiatives to activate community partnership and communicate with citizens and country’s institutions.

He pointed out that the FNC General Secretariat spares no effort in achieving the FNC’s six strategic goals including establishing national unity and good citizenship, strengthening the legislative system according to the best international standards, promoting the FNC’s monitoring role to achieve the UAE Vision 2021, supporting the UAE’s foreign policy through the leading role of parliamentary diplomacy, improving social communication and participation, and developing the capabilities of the FNC’s bodies to achieve exceptional.

He noted that the FNC’s parliamentary strategy is a model of a wise, balanced parliamentary performance, delivering the best to achieve the nation’s wellbeing and implementing  the directions of the UAE leadership to act in the country’s and its people’s interest and promote the UAE status.

H.E. Azza bin Suliman explained the FNC’s legislative, supervisory and political competencies. The council’s legislative competencies consist of the discussing, rejecting or approving draft laws. It also has the right to discuss constitutional draft amendments and drafts  of the general budget of the state and the projects of its final accounts, and to express its opinion on International treaties and conventions.

The Council exercises its monitoring role through specific tools, including the presentation of general issues for discussion and submission of recommendations to the government, addressing questions to the Prime Minister or to the ministers, each in his own jurisdiction, and the disposal of complaints by citizens against federal government bodies.

Political responsibilities of the council include the diplomatic parliament performance conducted by the FNC’S Inter-parliamentary Division, which participates in the federal, regional and international parliaments as well as parliament conferences and seminars. The council also conducts visits to other countries’ parliaments.

H.E. Suliman pointed out that the council has accomplished a number of local and international achievements including, at the local level, discussing various topics, raising concerns and adopting recommendations to boost the country’s different sectors.

In the education sector, according to her, the council, having considered the education requirements, has raised to the government the importance of establishing a national university, which the UAE government has approved, resulting in the establishment of UAEU, the first university in the UAE.

Recognizing the significance of developing scientific research, the council suggested developing a fund to support scientific research in the country, where UAE private institutions and corporates can participate. It also raised the request to establish a federal authority to be part of the Ministry of Education to license and certify private schools after reviewing its curriculums and teaching methods.