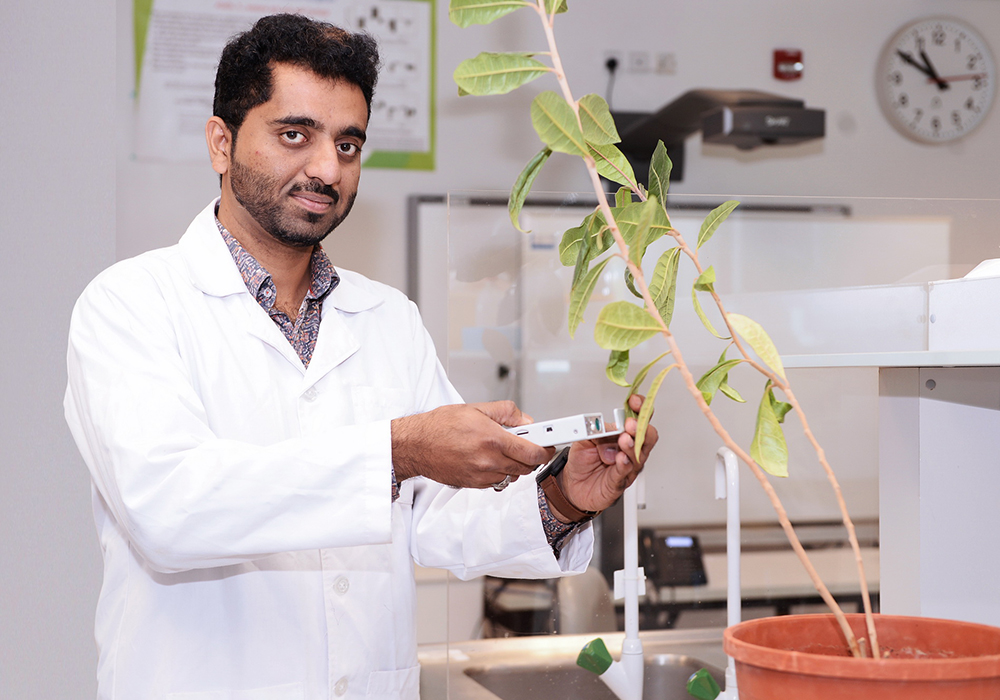 New research has been developed in plant species and their growth in an increased CO2 enriched-environment. As greenhouse gas emissions are expected to double in the next 50 years, from 400 to 750 parts-per million, the research is timely.

“We want to see which plants will be ready for this excess CO2 and we are working on a patent to develop a new irrigation system in both CO2 and water,” said Dr Taoufik Ksiksi, Associate Professor in Biology at the United Arab Emirates University’s College of Science. “The idea is that atmospheric CO2 is increasing, and it is considered one of the most potent greenhouse gases.” The greenhouse gas is a very potent gas, which thickens the blanket around the earth. “That’s where the idea stemmed from,” he said. “In the traditional way of looking at the growth of plants or selecting plants for landscaping or for crops for instance, we use high crops, which are tolerant to drought and salinity. But we don’t include the factor of response to CO2 so this will prepare us to select plants that will grow once the CO2 increases.”

The project is also the central theme for a PhD student, Shaijal Thru Ppoyil, who is in the first year of his four-year-project.

Funded by the United Arab Emirates University’s National Water Centre, the project studied a total of eight to 10 plant species, including desert, crop and landscaping. Their growth responses to CO2 enrichment and CO2 fertilisation were then assessed. As CO2 is a byproduct from a number of aluminium manufacturers from around the country, it is used into the plant as a fertiliser. “We fertilise the plant with CO2, which will make it grow more,” Dr Ksiksi said. “We are hoping we may even shorten water inputs, so irrigating with less water and getting the same yield or growth pattern. That way, we use CO2 fertilisation to economise in irrigation waters.”

Many of the results are in the process of being published, with the majority of desert species responding well to the increased CO2. “We expect that the Ghaf tree would be beneficiary from this CO2 fertilisation,” he said. “We looked at the early stages of growth, and many of the leafy plants also benefitted. This will encourage us to grow more of these local desert plant species in landscaping, while saving us water.”

Many of the crop species will benefit from the new research, which will help in bridging the food security gap in the UAE. “However, some of the introduced species, such as exotic species, did not do as well as the other two groups of plants,” he added. “We are testing it in our laboratories in growth chambers, and in the university’s Al Foah farm using greenhouses.”

The university is leading in this field of research funding across the UAE. “Not much is done in the UAE in this field, maybe due to a lack of experience and equipment,” Dr Ksiksi said. “It’s very important to take care of the CO2 and save some of the irrigation water. Initial results showed that up to 33 per cent of water-saving is possible for the plants growing at 750 to 1,000 parts-per million CO2.”

The team is in the process of submitting a patent for newly-developed irrigation pipes related to the project.