Language organisation in the brain successfully mapped out by UAEU 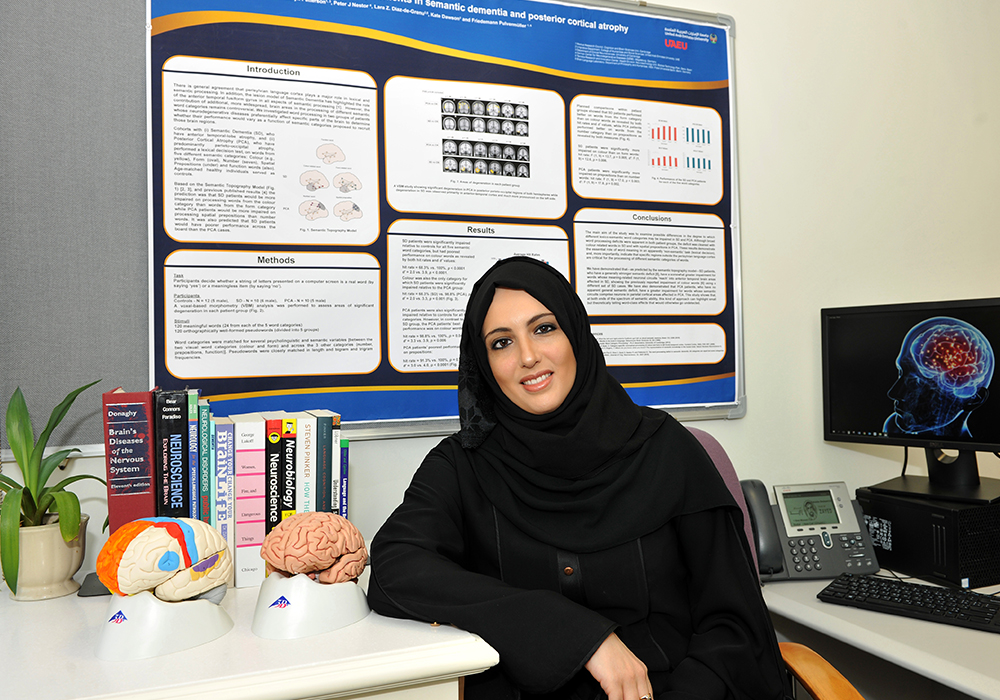 Researchers attempted to dig deeper. Dr Shebani investigated language deficit in patients, including those who have degeneration in different areas of the brain.

If dementia patients have degeneration in a very specific area of the brain, and show a specific language or semantic impairment, such as in understanding or recognising a certain category of words, then this would provide very compelling evidence for the fact that the damaged brain area in those patients is necessary for processing a specific word category.

“If I could show that dementia patients with focal lesions are impaired in performing a language or semantic task, while healthy people perform well on the task, then this would provide clear evidence that that part of the brain is, in fact, essential for language processing,” Dr Shebani explained.

The technique she used tested semantic processing in case series of patients from two different clinical groups: patients with Semantic Dementia, who have damage to temporal areas of the brain, and patients with Posterior Cortical Atrophy, an atypical form of Alzheimer’s Disease sometimes called Alzheimer’s Type II, who have lesions in posterior regions of the brain.

Posterior regions of the brain are responsible for spatial processing, which entails understanding where objects are in space, being able to locate objects in space or estimating distance. “I thought this would be a fantastic idea for the study,” she went on. “The type II Alzheimer’s group has been studied extensively but their language ability has been little investigated because some of the patients’ more prominent symptoms, such as their spatial and visual deficits, took centre stage.”

She viewed it as an ideal opportunity to find out whether that back area of the brain in these patients would be necessary for processing or understanding prepositions of place, which are words referring to the location of objects in space, such as “under”, “between”, “near” and “beyond”.

She compiled a list of prepositions and lists of words from five other word-categories, including those related to colours, numbers, shapes and function words.

The prediction was that these patients would be significantly more impaired on processing prepositions compared to the other word categories. The study confirmed this, thus documenting the first deficit in preposition processing in patients with Type II Alzheimer’s Disease. “The brain absolutely fascinates me and we know so little about it,” Dr Shebani said. “As advanced as science has become and as many developments as there have been made in cognitive neuroscience in recent decades, we know just the very tip of the iceberg about how the brain functions, how it processes information, how language is organised in the brain and to what extent different areas of the brain contribute to language processing.”

Recent studies have shown that more and more parts of the brain are, in fact, recruited during lexical and semantic processing, which means that more widespread areas of the brain could be making an important contribution to language.

The research, which took a year to develop, has both scientific and clinical implications. Knowing more about language organisation in the brain can help provide more effective therapies for patients with speech and language impairment. “For example, based on the finding that the systems for action and language are closely connected in the brain, a new form of aphasia therapy was developed, which has been found to be very effective in helping aphasic patients recover language abilities,” Dr. Shebani explained.

A better understanding of how language is organised in the brain can also help surgeons, who must perform brain surgery on regular patients, avoid certain areas of the brain that are involved in language.

A part of the research was published in Cortex, a leading neuroscience journal, last year.