Researchers use hair to detect vitamin D deficiency in humans 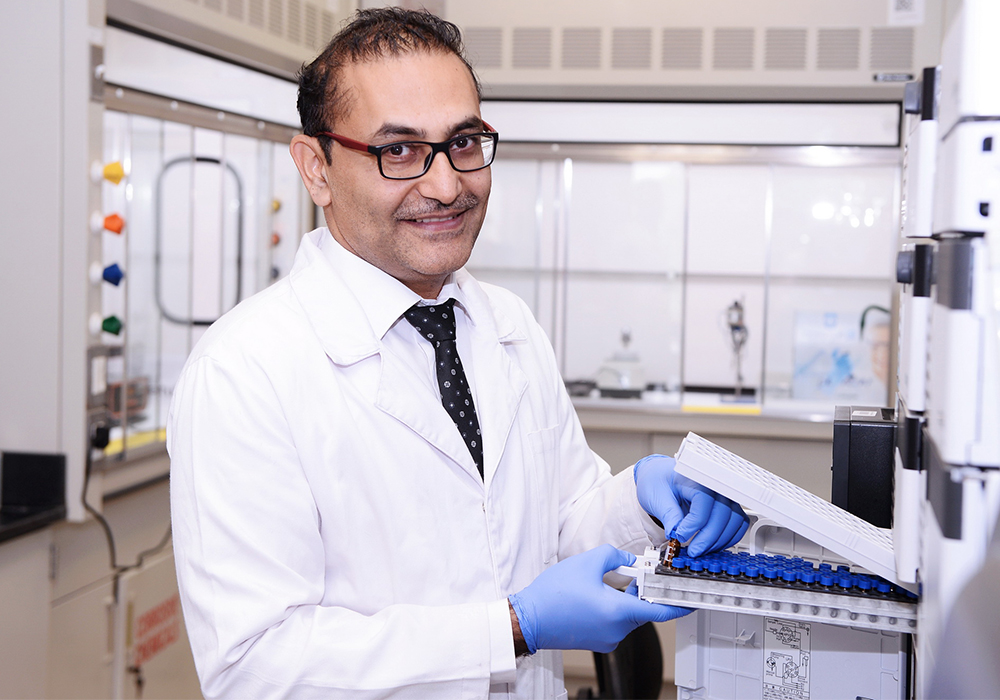 Researchers at the United Arab Emirates University (UAEU) have found an innovative hair test to easily detect vitamin D in the human body. Blood test has been used universally for the determination of vitamin D deficiency. But by analysing a small sample of hair from the crown of a human’s head, the amount of vitamin D can also be found, allowing for early detection of vitamin D-related diseases.

“Vitamin D deficiency is a huge problem in the UAE because there is a lot of sunshine but we are always indoors and people do not expose themselves to sunlight,” said Dr Iltaf Shah, assistant professor of Biochemistry in the Department of Chemistry, College of Science at the university. “UV B radiation changes sunlight to make vitamin D on our skin. It goes through our livers and kidneys to transform to other metabolites of vitamin D.”

The major disadvantages of vitamin D blood analysis is that it only provides short term information for vitamin D levels in our body. Due to fluctuations in the blood levels of the forms of metabolite found in the hair called 25-hydroxyvitamin D, it is also very difficult to estimate the actual seasonal variations in 25-hydroxyvitamin D levels for a longer period of time. Hair analysis, on the other hand, provides a wider window of detection, from a month to a year, and the full history of vitamin D absorption and homeostasis in our body.

Recent research shows that vitamin D deficiency is related to many diseases, such as obesity, rickets, osteomalacia, cancer and Alzheimer’s disease. “If you have sufficient levels of vitamin D in your blood, you will have less chance of getting these diseases at a later stage in life,” he said. “People are still exploring it.”

Not many studies have been conducted in the Middle East, especially in the UAE, as to find ways to tackle this global epidemic. “People are suffering from vitamin D deficiency, they don’t know what to do, and the current tests are not enough to give a clear picture” Dr Shah said. “The deficiency of vitamin D could have serious consequences, mainly in pregnant women, lactating women, in the neonates and children that can develop rickets and osteomalacia.”

Vitamin D helps in the absorption and mineralization of our bones, with minerals like calcium, phosphorus and magnesium.

Previous research shows that, although 90 per cent of the UAE population is deficient in vitamin D, it is mainly prevalent in Emirati women. Recently, Daman, the biggest insurance provider in the country, announced it would not cover vitamin D test due to the high cost of analysis involved. “That’s why it’s really important, to investigate and find new innovative and cheaper techniques for vitamin D determination,” he added. “So we thought to come up with another technique, a ‘vitamin D hair’, which is non-invasive as there is no need to draw blood, no worry of infestion as hair could be easily collected, stored and transported, as compared to blood samples.”

There is also no need to put the hair in dry ice or in a freezer at -80C like blood. “The half-life of major circulating form of vitamin D, 25-hydroxyvitamin D, in our blood is from few hours to few weeks so it stays longer in the blood and people rely on it for estimation of vitamin D.”

The process of vitamin D extraction from hair involves decontamination – removing hair colour and other contaminants sticking to the hair, grinding the hair into powder and ultrasonication, which uses sound waves to break their hair powder further, releasing vitamin D. Extraction then takes places, using an organic solvent.

The sample is then placed in a glass test tube where nitrogen gas is used to dry it. Methanol is added to re-dissolve the sample, which is then injected into a Liquid chromatography tandem mass spectrometry instrument (LC-MSMS), which unveils the mass of the compound to be able to identify and quantitate it. “We can then see how much vitamin D is in the hair sample,” Dr Shah said. “We tried to find out if we could measure up to 10 metabolites of vitamin D, but we were only able to detect one major metabolite called 25-hydroxyvitamin D. As per our knowledge, vitamin D hair test is a new innovative test that nobody has done before and it’s quite new.”