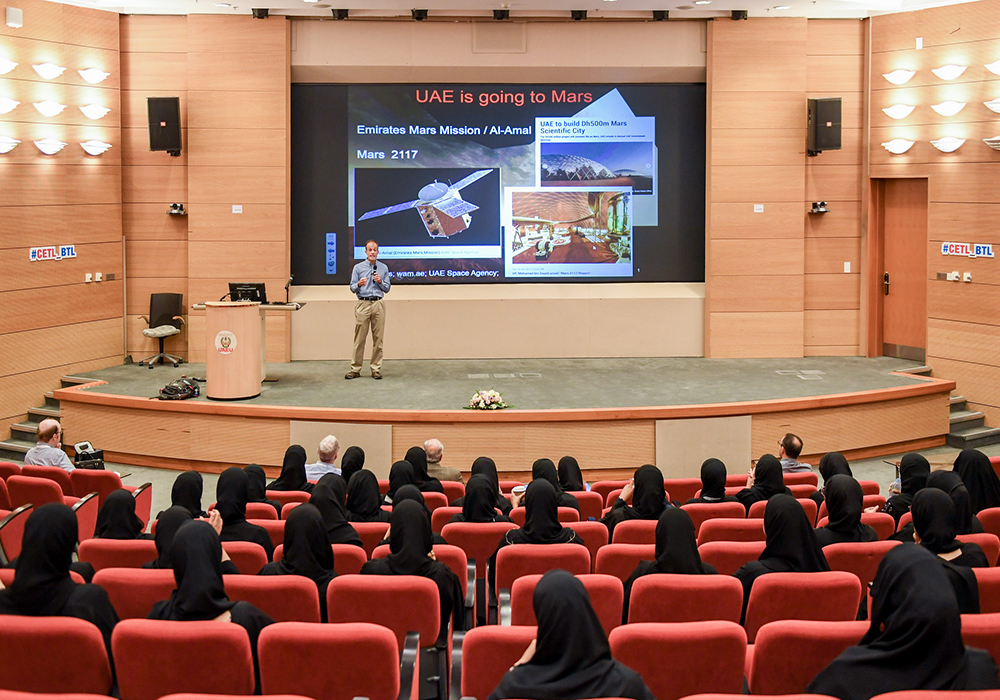 The United Arab Emirates University (UAEU), in collaboration with the National Space Science and Technology Center, organized a lecture titled "Mars: a very, very Dusty Place", presented by Dr. Michael Wolff, an Expert of EXI in the Emirates Mars Mission (Hope Spacecraft) with the attendance of faculty, researchers and students.

"The Red Planet has different climatic characteristics compared to other planets in the solar system,” explained Dr. Wolff. “Because of its thin atmosphere and distance from the sun, it is cooler than the Earth, with an average temperature of about -60 degrees celsius. There is a number of factors that affects the Mars’s climate including: ice caps, water vapor and dust storms and carbon dioxide, constituting 95% of its atmosphere. Unlike the Earth, on Mars, the solar energy is absorbed by dust particles”.

Dr. Abdelgadir Abuelgasim, Department of Geography and Urban Planning, UAEU, said, "this lecture aims to introduce UAEU students to the importance of space research and transfer knowledge and experience gained from research on Mars. The UAE National Mars project, is the first Arab probe to Mars and the UAE is one of the nine countries aspiring to explore this planet. The probe will be launched in 2020 and is scheduled to reach Mars by 2021, coinciding with the 50th anniversary of establishing the UAE. The planning, management and implementation stages of the probe project are carried out by an Emirati team based on their skills and diligence to acquire all knowledge related to the space science. The project is supervised by the Emirates Space Agency and the mission's objectives are to build highly qualified Emirati human resources in space technology, and to enhance the UAE's position at the world’s space race.

Dr. Wolff presented how dust plays an important role on the surface of Mars. He also noted that the planet's unique topographic features including its  rocky surface with many canyons, volcanoes, dry lakes everywhere, and red dust covering most of its surface. One of its most prominent geological features is the existence of the largest volcanic mountain in the solar system, called the Olympus Mons.

At the end of the lecture, the attendee researchers discussed the scientific and technical aspects of making Emirates Mars Mission a success and the scientific challenges in the near future.