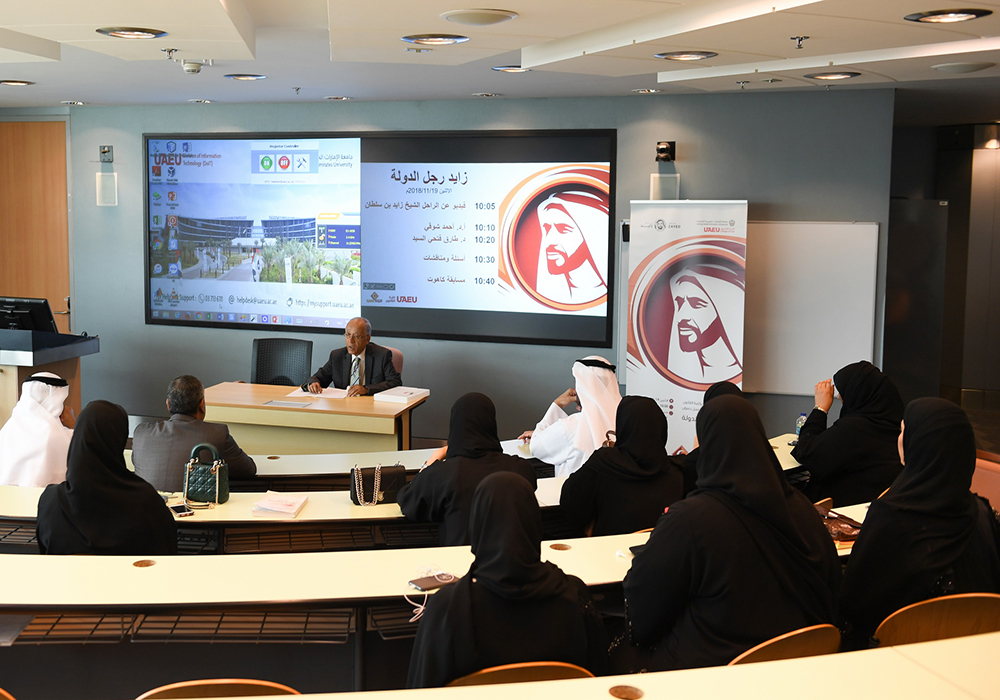 Coinciding with the Year of Zayed, the College of Law at the United Arab Emirates University (UAEU) organized a seminar titled ‘Zayed: The UAE Statesman’ with the Prof. Mohamed Hassan Ali, Dean of the College of Law and a number of faculty members and students in attendance.

The seminar started with a video presentation showing memorable quotes by the late Sheikh Zayed bin Sultan Al Nahyan, and his adoption of equality and justice as basis of the UAE leadership in making economic, social and humanitarian decisions. This was reflected in his support of the federal judiciary and promoting its independence. The UAE has become an example of achieving equality and justice among all spectra of society, demonstrating the UAE's experience, being a model country for security and safety, and a favorite global destination for all nationalities to work and live in a country that practices rule of law.

Dr. Ahmed Shawki, a professor at UAEU, in his paper ‘The Democratic Orientation in Sheikh Zayed's Quotes’, reviewed several of the Sheikh Zayed’s quotes, including "I believe in the necessity of people taking responsibility in Shura through a local council representing the different UAE society’s spectra”. In 1975, the late Sheikh Zayed bin Sultan Al Nahyan, met with the president and members of the Supreme Federal Court, where he had a lengthy dialogue with the judges on the provisions of the Sharia and the need to apply them.

In his paper, ‘The Philosophy of Governance in Sheikh Zayed's Thought’, Dr. Fathi Hassan presented the role of Sheikh Zayed's strategic vision, wisdom and insight in consolidating the concepts of democracy and good governance. The presenter reviewed the priorities of the UAE government since its first day in consolidating political, social and welfare justice, and the happiness of the UAE citizens and residents through its philosophy of governance and unconventional approach to establish the foundations of the Union and achieving stability and welfare of the nation. He showcased how the Late Sheikh Zayed contributed with his thoughts to making the UAE, take the lead in various fields including the judiciary.

During the seminar, students were introduced to the competition titled ‘Zayed: The UAE Statesman’ presented on kahoot.com, which aims to encourage students to learn about the philosophy, thought and achievements of the UAE leadership in establishing justice and law throughout the UAE development process.