Fifth International Conference on Engineering Geophysics to launch in October 2019 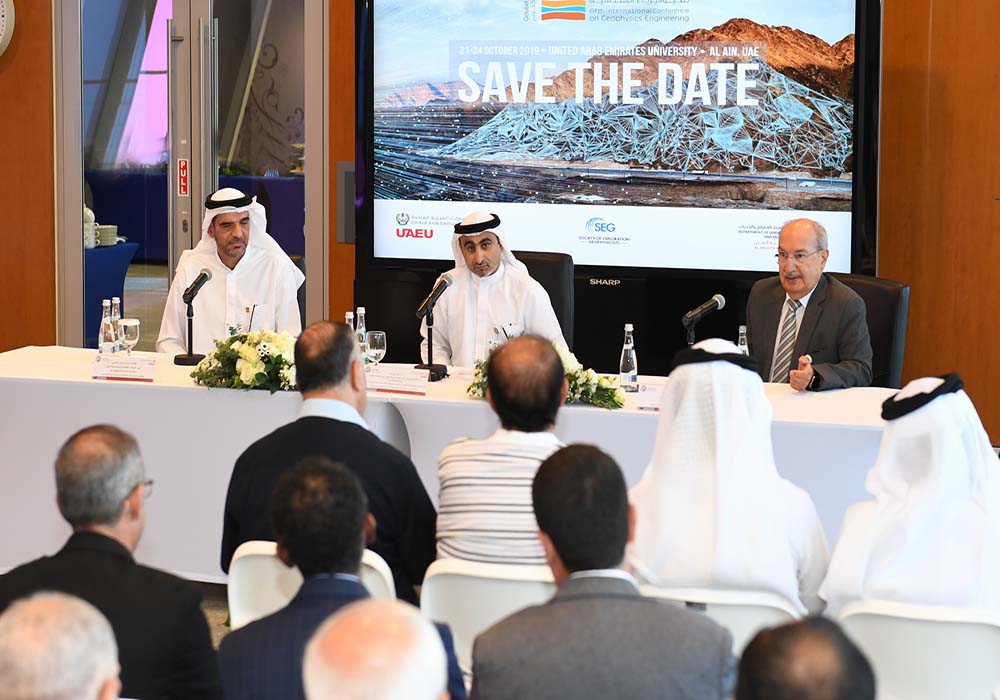 United Arab Emirates University (UAEU) and Al Ain Municipality in partnership with the Society of Exploration Geophysicists (SEG), one of the biggest specialized societies worldwide with more than 48,000 members, are organizing the Fifth International Conference on Engineering Geophysics (ICEG), to be held during 21-24 Oct. 2019 at UAEU.

The International Conference on Engineering Geophysics achieved a notable success in its last editions since 2011, has been accredited by Abu Dhabi Executive Council (ADEC) and has been listed as part of the activities calendar for the Abu Dhabi Emirate. Having gained positive remarks by international experts and specialists, the conference has been ranked as one of the top five international specialized conferences in the field of Engineering Geophysics in the last thirty years.

He added that Eng. Dr. Abdullah AlNuaimi, Minister of Infrastructure Development was the keynote speaker of the opening session of the last edition. A number of the world’s best experts in the field gathered to share knowledge in this critical field, with more than 200 papers submitted to the conference, 132 of which were accepted based on relevant scientific criteria.

"The importance of engineering geophysics stems from its applications to detect underground geological formations, which may pose a threat to lives and property. These methods can be undertaken without drilling or altering the site's features, or destroying the environment. The array of applications of this field means that there is a method suitable for each site." said Professor Haydar Bakr, Chairman of the Scientific Committee of the Conference.

He pointed out that the importance of geophysics is on a massive increase in the fields of construction, environment, criminal investigations and archeology. This science now constitutes an integral part of studying civil and industrial construction sites, providing designer engineers with vital data about the site, and searching for underground water sites. In addition, over the last decades, the geophysical survey has gained great importance in studying construction sites.

Speaking on the endorsement of geophysical studies as a pre-construction procedure in the Emirates of Abu Dhabi, Mr. Adnan Al Hashimi, Director of Spatial Data at the Municipality of Al Ain, stated, “the unprecedented urban development of the Emirate of Abu Dhabi led to the decision by the Department of Urban Planning and Municipalities in the Emirate of Abu Dhabi to adopt geophysical study and consider it mandatory for obtaining building permits in the emirate”. “Geophysical study is also essential in investigating the surface layer of the Emirate in order to establish strict rules to avoid any potential hazards that may occur in the future,” added Mr. Al Hashimi.

The preparation for the Fifth Conference has been completed to receive around 200 guests, researchers and experts, from different countries including United States, Europe, Australia, China, Japan, Gulf countries.

In alignment with the government’s directions to encourage innovation in various fields, the Innovation Award for Geophysics, the first of its kind worldwide, was launched in the fourth conference, with a jury of international experts, to encourage researchers and professors of Geophysics and its applications to innovate in this field, and will continue to be organized in the coming cycles of the conference.

In addition, the Best Student Paper Award will be held to encourage students to participate in high-quality research, and the best three research will be selected at the coming conference.