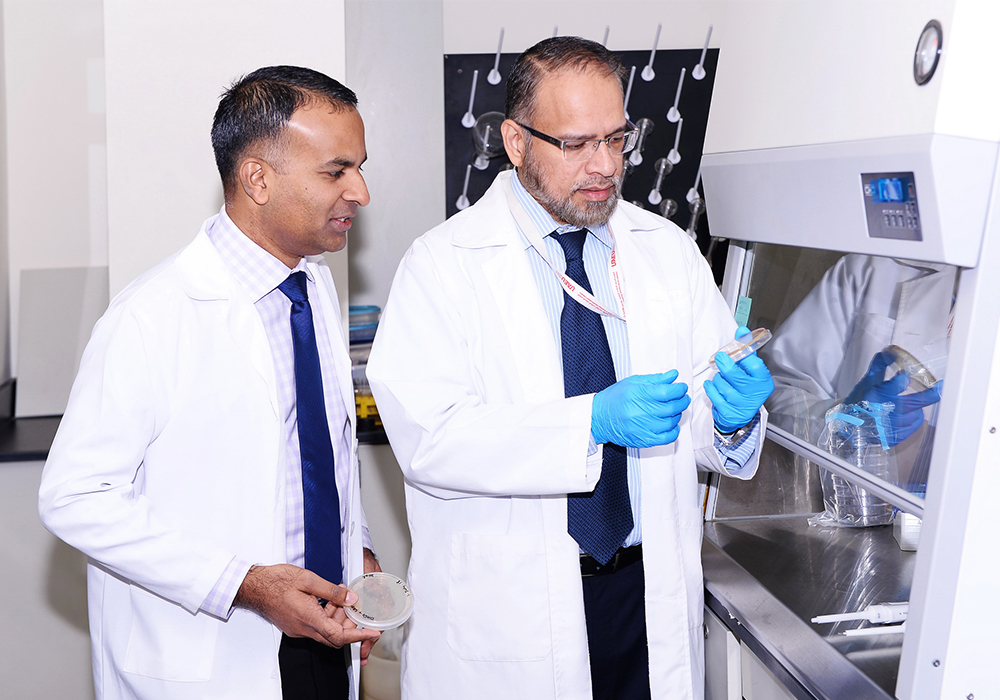 Researchers at the United Arab Emirates University are focusing on one of the UAE’s top priority areas: the future of clean water.

A two-year grant, funded by the university, allowed Professors Salman Ashraf and Ranjit Vijayan to identify a novel strain of bacteria from petroleum sludge that can degrade pollutants in water in a matter of hours.

“The idea was the cleaning up of organic pollutants in water,” said Dr Salman Ashraf, Professor of Biochemistry at the university’s College of Science. “It’s a global issue: water security and water technology are some of the priority areas for the UAE and most developed countries. The problem is we have more and more pollutants like industrial compounds, pesticides, medicines, and personal care products in our water supply.”

A number of scientists have attempted different ways to remove and destroy these so-called emerging pollutants, before degrading them in water.

Dr Ashraf outlined three kinds of approaches: physically, including filters at home and black charcoal filters, chemically using bleach in swimming pools, and biologically where enzymes and bacteria are used in the water. “The whole idea is that enzymes can break them down and bacteria can eat them up for food and break them down,” he said. “That is my area of research. We wanted to see if we could isolate the natural bacteria from the petroleum sludge and see if they can degrade different kinds of organic pollutants in water.”

The novel aspect of the project is the petroleum which has chemicals that resemble pollutants in the water. “We did a whole genome sequencing and we were able to identify a novel strain of bacteria from petroleum sludge,” said Dr Ranjit Vijayan, Associate Professor of Biology. “We named the new strain UAEU-H3K6M1. This bacteria has very interesting bio-remediating abilities to degrade the pollutants in water, in a matter of hours, depending on how much bacteria you put in. This work was published in the July 26 issue of the American Society for Microbiology’s prestigious journal ‘Microbiology Resource Announcements’.”
A significant difference in results can usually be witnessed within four hours. Twelve hours ensures the complete destruction of organic pollutant test samples. “More work has to be done as a follow-up where we carefully look at different classes of organic pollutants and how to increase the efficiency of the process,” he added. “We have to look at degrading many others. It’s the first time we have a UAEU-named bacterium, which was exciting for us and this is done a lot in the United States and Europe where research labs would honour their university by naming the bacterium after it.”

Chemistry Master’s student, Manal Al Hafeti, from the UAE, also worked on the project and became the first author on the paper. Findings will allow people to use the bacteria as is in waste-water treatment plants. “It’s a natural bacterium and it’s not genetically modified,” said Dr Ashraf, whose speciality is biochemistry and biotechnology. “It’s naturally found in the environment. If we use the bacteria by spreading it in polluted water, we are not introducing a new kind of organism as it exists in the same environment as the UAE.”

The UAEU scientists plan on studying the genes to find out which are involved in breaking down organic compounds and using those genes to make enzymes to use in water treatment applications.

“The university is encouraging us to do research in areas of strategic importance to the country and water research is one of the top priority areas,” Dr Ashraf concluded. “It is beneficial to the country and develops technology directly applicable and useful here. Bacteria are an amazing organism and have tremendous potential to evolve and adapt and do different kinds of things – the idea was ‘can we find a bacteria that has evolved to eat organic pollutants as food – both a personal scientific curiosity but also a priority research area for the UAE and the UAEU”.