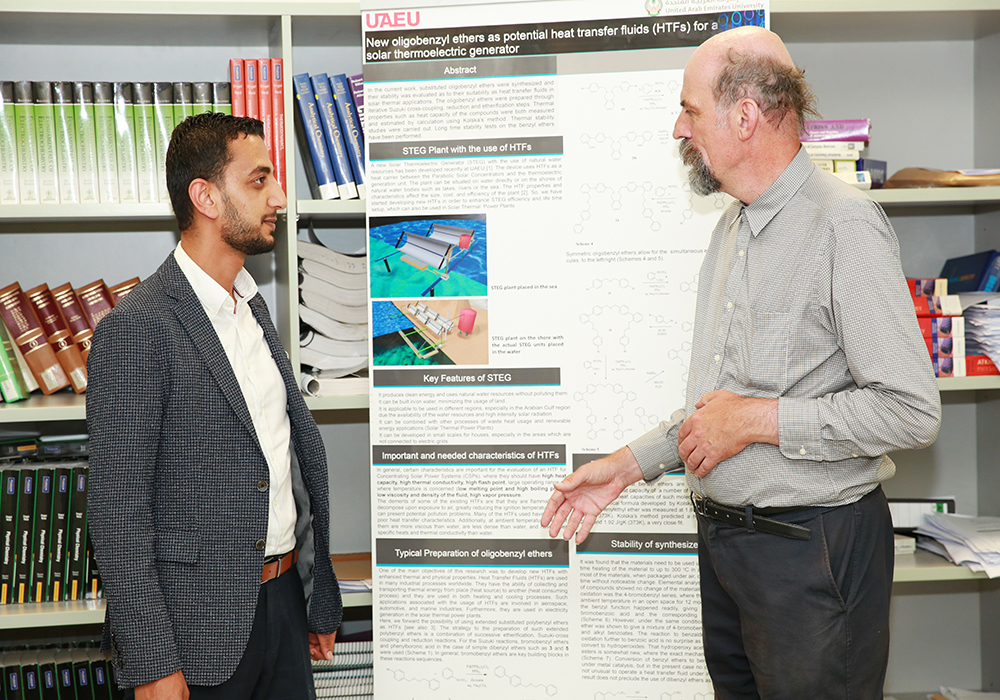 There are a number of ways to convert solar energy to useful electricity. One such way is by using the so-called Seebeck-Peltier effect, also known as the thermoelectric effect.

That is the method used by Dr Thies Thiemann and one of his students at the United Arab Emirates University, which allows to produce energy using minimal land.

“We have two different conducting metals or semi-conducting materials touching each other directly at one end and held at two different temperatures at each end,” said Dr Thiemann, Professor of Chemistry at the university. “Usually, more charge carriers will move to the lower temperature end of the metal than to the higher temperature end. As this will be slightly different for both metals or materials, one will obtain a potential across their junction which will drive a current.”
The high temperature end of the metals can be achieved by heating a fluid with the sun’s rays. The fluid will then transfer the heat to the higher temperature end of the two metals or materials. “As long as one can maintain the lower temperature end of the materials, one can generate electricity in this fashion,” he said. “The process of converting solar thermal energy to electricity is well-known as high-temperature solar thermal electric power generation (STEG). The Seebeck effect itself had already been discovered by Alessandro Volta, when it was rediscovered in 1821 by Thomas Johann Seebeck.”
Usually, such a high-temperature solar thermal electric power generation system consists of a solar collector, a heat transfer fluid and thermoelectric generator (TEG) modules, in which the Seebeck effect is used to convert thermal energy into electric energy.

Overall, the heat transfer fluid is heated to a few hundred degrees Celsius by irradiation from the sun, collated by solar collectors. The heat transfer fluid is then transported through a piping system over the high temperature end of the thermoelectric generator (TEG) to help maintain the warmth.
The heat transfer fluid is then cycled back to the solar collector to reheat. “The question that still needs to be addressed is how to achieve and maintain the low-temperature end of thermoelectric generator,” Dr Thiemann said.
To this effect, in March 2013, Yosef Al Jasem, at the time a chemical engineering student at the university, and Dr Thiemann submitted an IP disclosure with the idea of using natural water, found in the sea, lakes and rivers, as the lower temperature boundary for the thermoelectric generator. “This allows for the lower temperature boundary to be largely unaffected by the TEG unit itself as the thermal energy released from the device quickly dissipates due to natural mixing phenomena into the large volume of the natural water reservoir,” Dr Thiemann said. “This design would allow STEG units to be located on natural water, on banks or shores of natural water bodies, and minimises land use. The design can also potentially be used for ships or projected man-made islands.”
Solar energy is currently a vital area of research in the region. “It took about a year and a half to develop the system,” he added. “It could definitely be used in the Gulf and a GCC patent was given to us.”