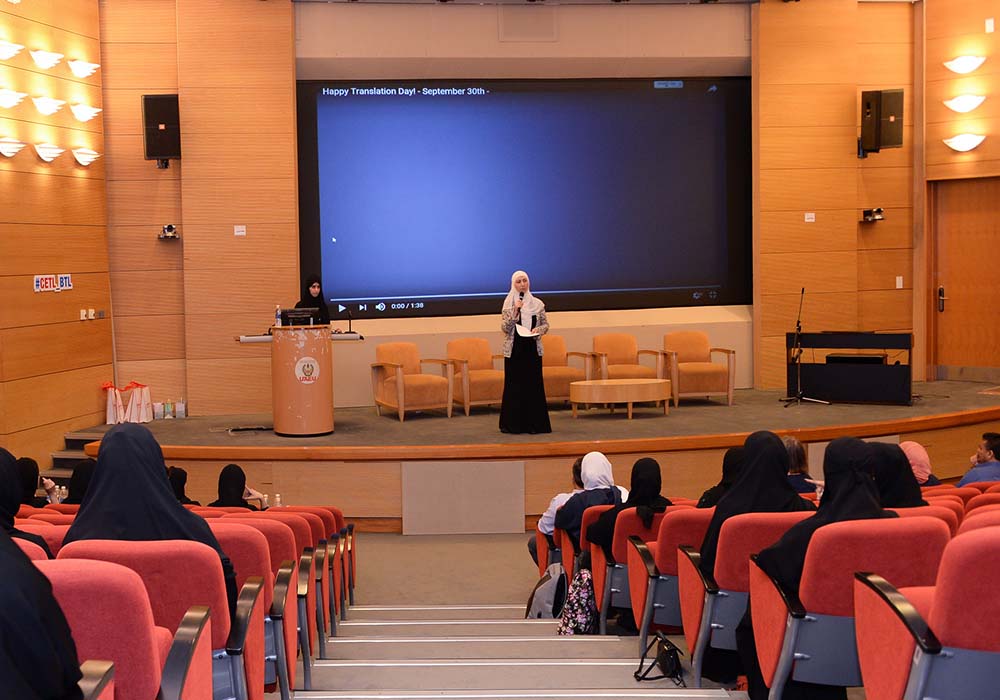 The Department of Translation Studies of the College of Humanities and Social Sciences at United Arab Emirates University (UAEU) organized on Tuesday 9 Oct. 2018 in the IT Auditorium, the Translation Day to raise awareness of the importance of translation and learning foreign languages.

Dr. Hala Sharkas, Chair of Translation Studies Department, explained that it is important to introduce students to the significance of translation and learning international foreign languages. Dr. Sharkas also spoke about the career prospects of translation students and the pivotal role of translators in transferring knowledge, contributing to cultural exchange and diversity in the UAE.

“The Translation Day aims to raise awareness of the translation’s role in achieving effective communication between nations and in knowledge transfer, reflecting the cultural diversity of the UAE, being a platform of different ​​cultures and languages”, said Dr. Gamal Mohammed Jaber, Chairman of the Activities Committee in the Translation Studies Department. “Such an event demonstrates the university’s keenness on translation and translation issues.”

The event, attended by a number of faculty members and students, involved a range of activities, including video presentations about translation and German, French and Korean languages. The student, Shamsa El Neyadi, French Language Club President, showcased the club’s activities and its role in encouraging students to learn French, a language spoken by more than 444 million people around the world. A French song about children and peace was performed by students of the French language minor, with English subtitle presented on the screen. Another session was devoted to German and Korean languages to introduce the languages and the minors.

On the event’s sidelines, an exhibition was held with various activities presented by translation students to showcase aspects of French, German, Chinese, Korean and English cultures.