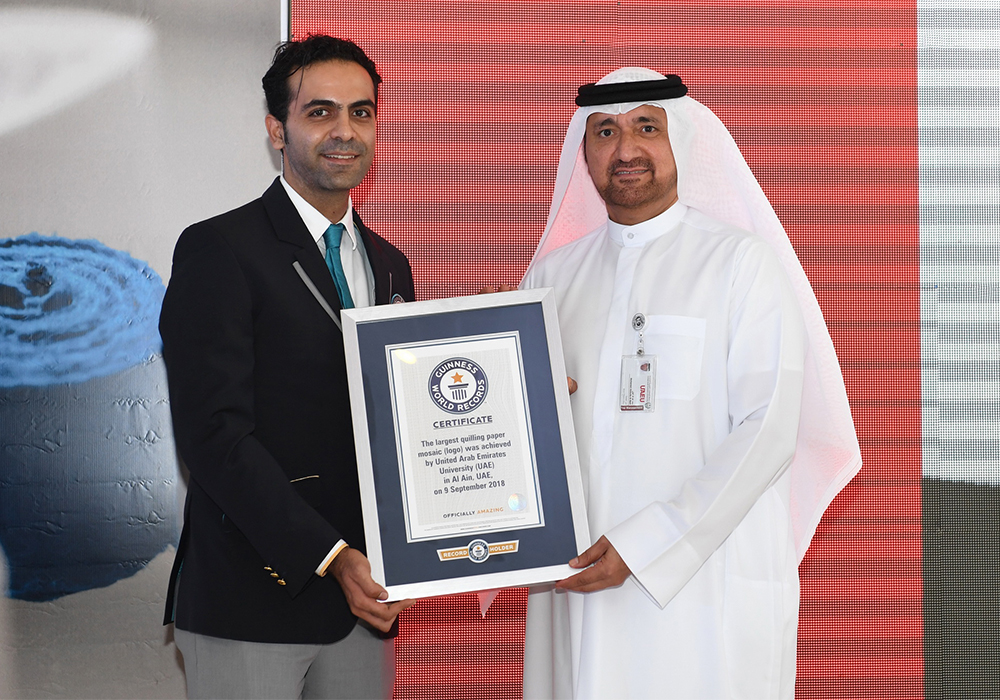 United Arab Emirates University (UAEU) has set a new Guinness Record for the World's largest quilling paper mosaic of the Year of Zayed Logo. The launch event was attended by Professor Mohamed Albaili, UAEU Vice Chancellor, a number of UAEU officials and students, and representatives of Guinness World Record.

The idea of forming the mosaic was developed by 532 UAEU male and female students as part of the university’s initiatives in the Year of Zayed to highlight their affection and appreciation to the late Sheikh Zayed bin Sultan Al Nahyan and to commemorate the centennial anniversary of his birth.

Prof. Albaili stressed that this handwork is a personal student initiative with the aim of drawing the world’s attention to the role of Sheikh Zayed in founding UAE, his endeavors to achieve success and his affection to humanity. The students also aimed to strengthen pride of and loyalty to the UAE’s founding father and leadership.

“This initiative relates to the UAEU objectives of encouraging student innovation,” explained Dr. Ateeq Al Mansoori, Associate Provost for Students’ Affairs. "This UAEU achievement of building a 31.25m2 mosaic was carried out by 532 students working for 3420 hours with the support of the University life Section.”

Student initiators of the mosaic expressed their delight in forming the world’s largest quilling paper mosaic. Fajr Khamis Al Sadi stated that the great handwork was created using simple non-expensive tools. “What distinguishes our teamwork is that it has great determination, enthusiasm and team spirit. It took us 7 consecutive months of working at the university to complete this work,” added Al Sadi.

The 10m long and 3.125m wide mosaic created using 276800 papers will be showcased at the university’s colleges.