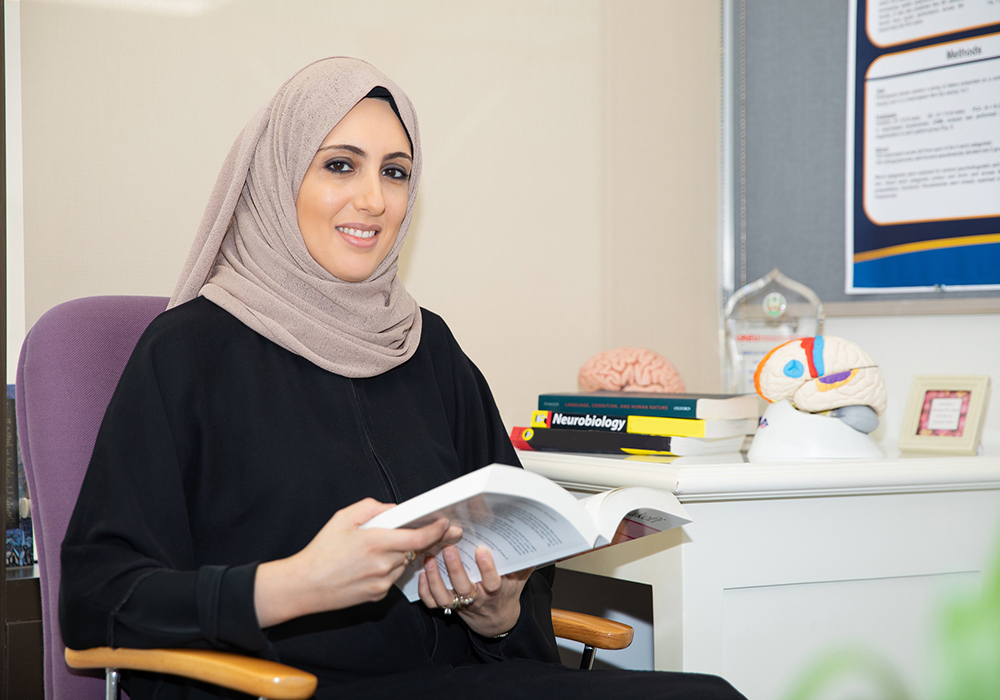 Recent research at the United Arab Emirates University has examined different areas of the brain which perform different language and memory related functions.

“It has already been established that when we perceive – hear or read – words referring to actions such as jump, grasp and chew, this activates motor regions of the brain in the frontal lobe,” said Dr Zubaida Shebani, Assistant Professor of Cognitive Neuroscience at the university. “A large number of studies have also shown that the pre-frontal cortex, the front-most part of the brain, plays a prominent role in memory processes.”

The aim of the study was to clarify which areas of the brain are involved in the active memory maintenance of action words. More specifically, the study examined whether the same motor regions of the brain, which become active when we hear or see action words, are also involved in keeping action words in working memory. “The human is fascinating,” she explained. “I wanted to see whether the brain areas that had previously shown to become active during action word processing would be the same areas that house memory neural networks for the same action words. Obviously, it is important to know which brain regions are involved in working memory processes for words because it could have important theoretical and clinical implications.”

In recent years, new aphasia therapy methods have developed for stroke patients, based on the fact that the brain systems for action and language are closely intertwined. “After it had been established that motor systems of the brain and language are very closely interconnected, I wanted to see how memory processes fit into the whole picture, specifically for action-related words,” Dr Shebani noted.

While lying in a functional magnetic resonance imaging (fMRI) machine, participants saw a series of action words appear on a computer screen while their brain was being scanned. The words were related either to actions typically performed by the arms, such as grasp, wave, pick and throw, or by the legs, such as step, jump, kick and stroll.

After each series of words were presented, participants were required to keep the words in working memory for several seconds before a memory check was performed. The experiment was specifically designed to determine which specific part of the brain is active during active memory maintenance of action words.

Results show that the brain areas active during action word memory, as opposed to action word perception, were in more anterior regions of the frontal cortex. These findings of an anterior shift of activation are in line with predictions of a new neuro-computational model of “memory progression” to the pre-frontal cortex.

The first-of-its-kind study took two years to come to fruition, due to the complexity of its technicalities and ensuring the right paradigm and design was used. “Because it is an fMRI experiment – a technique which is used for scanning which parts of the brain become active during different cognitive processes, there is a great deal of preparation that goes into place,” she said. “This includes making sure the paradigm is right, carefully matching stimulus items and selecting suitable participants for the study as they have to be free of neurological diseases and very right-handed, so that there is consistency in the way their brain is organized.”

Based on the finding that the brain systems for language and action are closely interconnected, an innovative aphasia therapy method was previously developed, leading to improved language ability in stroke patients with even chronic aphasia. “The present study advances our understanding of action word memory processes in the brain which, in turn, could lead to more effective therapeutic techniques for patients with language/memory impairments,” said Dr Shebani, who carried out the study in collaboration with researchers at the University of Cambridge and the Freie University of Berlin. “The study has been submitted for publication in a leading neuroscience journal and should be in press later this year. The study has also been published in bioRxiv, a pre-print repository for neuroscience research”.