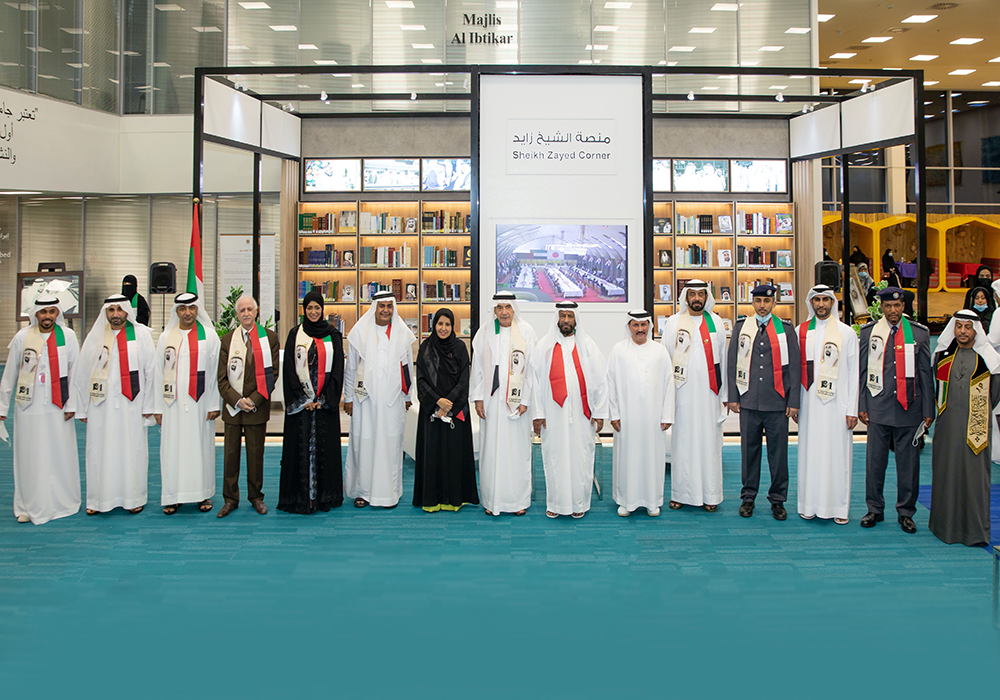 Zaki Nusseibeh: Sheikh Zayed believed that the future direction of our nation originates in the pages of books.

Today the United Arab Emirates University inaugurated its new collection or works in memory of Sheikh Zayed bin Sultan Al Nahyan, may God have mercy on him, in the presence of H. E. Dr. Maitha bint Salem Al Shamsi. Minister of State, Sheikh Mohammed bin Rakkad Al-Amiri, Sheikh Salem bin Rakkad Al-Amiri, and a number of dignitaries of the city of Al-Ain, and the UAEU administrative and academic staff and students. His Excellency Zaki Nusseibeh, Cultural Adviser to His Highness the UAE President and Chancellor of the UAE University addressed the members of the University leadership, and academic, research and administrative staff in attendance.

He said, I am proud to stand before you to inaugurate the UAEU library’s new collection in the honor of Sheikh Zayed. Sheikh Zayed decided to establish the UAEU in 1976 because he believed that the future of all nations depends on the education of its children.

This leading national university is the realisation of Sheikh Zayed’s dream, providing its students with a world-class education. It produces an educated generation with the strong set of skills necessary to support the national economy. Its scientific research, creativity, and innovation provide the solutions to our nation’s problems”.

The Chancellor spoke of the time he first entered the Qasr Al Hosn, the residence of the Al Nahyan family since the eighteenth century. It was 1966 and he was due to meet Sheikh Zayed for the very first time, to conduct a recorded interview for an English language documentary. He said, “I was dreading the moment we would approach this legendary figure, who radiated stature, presence, authority, and charismatic leadership. Yet with great enthusiasm, Sheikh Zayed led everyone in his Majlis to shake hands with each of us. He told us that he was ready for the interview, and his compassion and warmth melted my terror. This meeting completely changed the course of my life”.

The Chancellor explained, “Sheikh Zayed was a tender-hearted poet who loved culture and learning. He was thirsty for knowledge, and believed that books hold the solutions and directions for our nation’s future. He thought leaders should be guided by knowledge and the values of humanitarianism, tolerance and acceptance of others”. The Chancellor concluded, “We dedicate our new collection to an exceptional leader, out of loyalty and appreciation. It will serve as evidence for future generations that the legacy of the greatest lives on in history, even after they leave this world.

Their ideas and achievements become immortal”. The Director of the UAEU Libraries Deanship, Dr Hamad bin Saray, explained, “The Collection is a research archive that documents Sheikh Zayed’s pathway and tireless efforts in building the federal nation and turning his dream into a reality”. The Collection was established under the directions and with the support of Chancellor Nusseibeh. It contains dozens of publications, books, and reference works about Sheikh Zayed. It documents his administrative and historical role in establishing and building the Union and federal state, from 1968 up until his death.

The resources include 90,000 photographs and illustrations, a set of documentary films, and Arab newspapers and magazines. These offer detailed and various perspectives on the development of the Trucial Emirates and the Union, and information about the political, social, and economic aspects of the UAE. There are also 500,000 British, Portuguese, and US documents that offer additional narratives of the history and progress of the UAE. Dr Hamad bin Saray explained, “In the future we will work to develop the contents of the collection, supplying reference notes and links, to create a specialised bibliography about the life of Sheikh Zayed”.

In addition to the Sheikh Zayed Collection, the UAEU Library has recently added a new section to its resources called the ‘Emirates and Special Collections Section’ comprising resources about the UAE, the library of Professor Ibrahim Al-Abed, the library of Professor Dr. Amer Hassan Sabri, and British manuscripts and documents. Furthermore the UAEU Library has established a ‘Scientific Research Services Department’. These will be offered within the umbrella of electronic resources shared across and between many of the university libraries in the UAE.