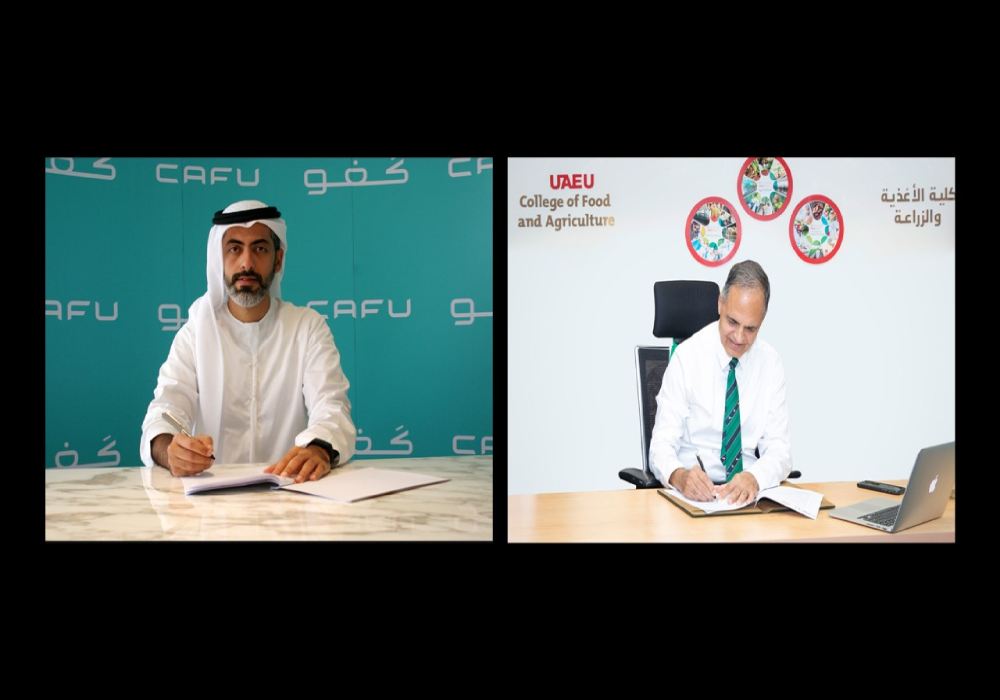 To strengthen the UAE efforts to combat desertification

To enhance the country's strategic efforts to combat desertification, CAFU, a leading company in technology services, has signed a research partnership agreement with the United Arab Emirates University to conduct in-depth research on the successful cultivation and plantation of Ghaf tree seeds in harsh climatic areas such as the desert environment in the UAE.

This research is the first of its kind to be conducted in the United Arab Emirates and represents the second phase of CAFU Ghaf tree seeds cultivation program, which aims to plant one million seeds in the UAE to help confront climate change. The study will contribute to the next phase of CAFU Ghaf tree seeds cultivation program, which will build on existing research and development work that has already been implemented to help improve and create a self-sustaining seed capable of sustaining nature in hot summer temperatures, in addition to increasing the viability of seeds for growth , plantation, and water retention. The results of the research will also strengthen the country's knowledge bank on promoting desert cultivation across a range of desert plant species to improve habitat survival under harsh environments with high temperatures and water scarcity.

The memorandum was signed by Dr. Bhanu Chowdhury - Dean of the College of Food and Agriculture at the university, and Rashid Al Ghurair, founder and CEO of CAFU. The signing ceremony was also witnessed by Dr. Mohammed Abdul Mohsen Al Yafei - Vice Dean of the College, and Mrs. Nabra Al Boosaidi, Director of Sustainability and Society Department at CAFU and the research team Dr. Shyam Corp Dr. Zainab Ahmed, and a number of faculty members.

The memorandum aims to enhance cooperation in the academic research activities, transfer available technology and modern agricultural techniques to build capacity for companies, in addition to contributing to the development of the next generation of agricultural technology that achieves sustainability, and enhance students' practical skills and training.

Dr. Mohammed Abdel Mohsen Al Yafei, Vice Dean of the College, said, “The Ghaf Tree Project is an ambitious initiative to revive arid ecosystems by planting millions of Ghaf trees, which are indigenous species that grow in the United Arab Emirates. Ghaf (its scientific name is Prosopis cineraria”) is the UAE national tree. It is a strong drought-tolerant tree that improves the quality of the soil in which it is grown and the air around it. Ghaf tree roots grow up to eighty meters, and each Ghaf tree absorbs up to 34.65 kg of harmful carbon dioxide daily, to be released later in the form of oxygen. It also provides an important habitat and food source for a variety of animals and birds, including desert owls and long-legged goshawks.

Rashid Al Ghurair, CAFU founder and CEO, said, “Ghaf tree cultivation is a labor intensive process. Especially in the desert climate of the UAE, where summer temperatures often reach 45 degrees celsius, given the intensity of cultivation required to make a difference in the environment. We came up with a solution represented in the use of state-of-the-art guided aircraft technology that relies on artificial intelligence, and to provide a solution through the “Made in UAE” initiative, through which up to one million Ghaf trees will be planted throughout the UAE leading to greatly improving natural environment and ecosystem.

Rashed Al Ghurair, CAFU Founder and CEO, also added: “We are pleased to announce our partnership with one of the most reputable universities in the United Arab Emirates in agricultural studies, as we seek to advance our research aimed at improving our desert habitat. As a responsible company, we are making great strides towards becoming a carbon neutral company and helping to address climate change that is of paramount importance to protecting the future for generations to come.

“This research will be a step forward in our quest to grow Ghaf tree seeds on a large scale via our drone technology in harsh weather conditions, increase the viability of seeds and improve their plantation time, as well as contribute to our country’s knowledge-based economy.”

He added, “The signing of this MoU is our first step to unleashing an unlimited range of potential research projects between CAFU and UAEU, which will also explore the potential of other plant species as we look to expand the program in the future.”