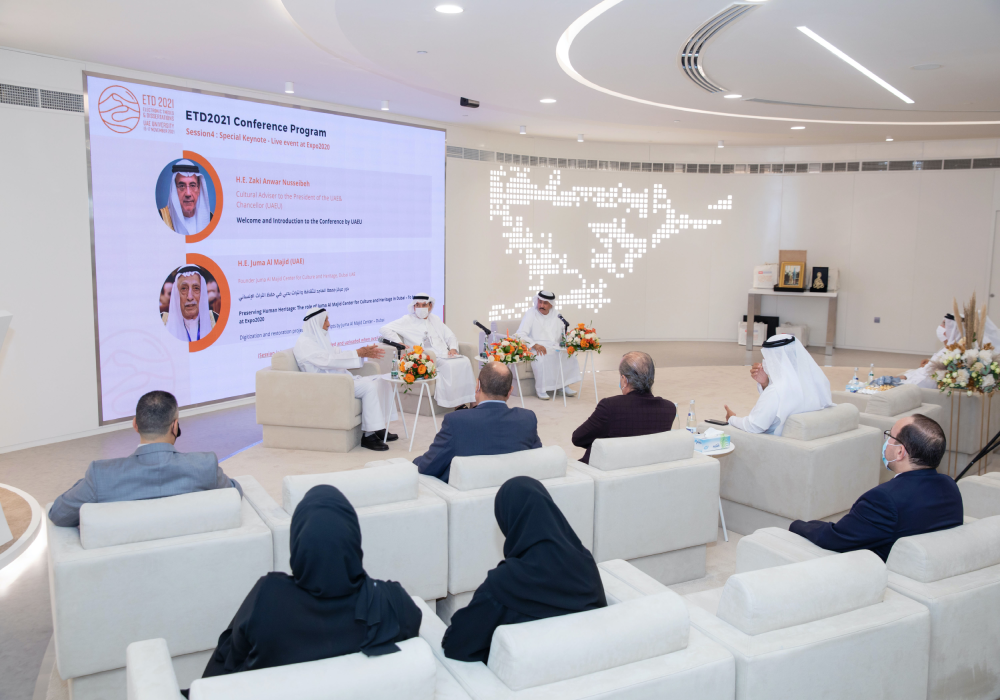 In a speech to the international conference on Networked Digital Library of Electronic Theses and Dissertations, under the patronage of H.E. Juma Al Majid

Zaki Nusseibeh at Expo 2020 Dubai: The UAE has a leading and pioneering higher education system in the region

His Excellency Zaki Anwar Nusseibeh, Cultural Adviser to His Highness the UAE President and Chancellor of the United Arab Emirates University declared, “The strength of the UAE higher education system lies in its diversity”. He said, “We have institutions with roots in all corners of the world. We have technical, specialist, vocational, liberal arts, and research-intensive institutions. Some are public, some private, some big and some small. Many are the result of international partnership and inward international investments”. This set up means that the UAE is one of the most important centers of higher education in the region, able to meet the requirements of the Fourth Industrial Revolution and Artificial Intelligence.

He made these remarks during a speech to a conference on the theme of ‘Open Scholarships in a Post-Pandemic World. It was the 24th international conference on Networked Digital Library of Electronic Theses and Dissertations, held at the United Arab Emirates University's pavilion at Expo 2020 in Dubai, in the presence of His Excellency Juma Al Majid, founder of the Juma Al Majid Center for Culture and Heritage, and several higher education leaders, academics, researchers, librarian specialists and students.

"I am pleased to be with you today as you address the issue of promoting open scholarship to make sure that researchers can locate and access graduate dissertations and thesis”, Nusseibeh said.

Explaining his interest in the gathering he said, “Libraries and the work of librarians and archivists have been central to my life and career. Reading has been my passion, and an essential source of energy, ideas, and connection to the world around me. During my career in the service of Sheikh Zayed, the founding President of the United Arab Emirates, I was often absent from the circles of advisers and administrators. Sheikh Zayed explained to them, “Oh but he is hard at work. He is reading”.

His Excellency went on to say that “Postgraduate students are our early career researchers. Their dissertations and theses are often their most inventive, innovative, and creative works. The first works of early career researchers are the seeds of their future field of specialization. It is new and original work, which is valuable to get hold of, and must be used if these young people are to make their names in the academic world”. However he was concerned that, “despite the excitement and vigor of early career research, most journal and book editors want to publish the works of established, highly cited academics. Therefore young researchers find it difficult publish. In turn, the fact that their work is not published means that our established researchers have difficulty accessing it and using it.”.

He stressed that “Publication is an activity that demands resources of many kinds. Researchers need financial resources to fund publication, and in many parts of the world these resources do not exist. Or the researcher’s university may not enjoy position in the European, North American, or Australian centers of higher education. In addition, researchers might not work in English, the predominant language of academic publication. And so because of the lack of resources of these kinds, the work of early career researchers may not be published. It will remain hidden from global view.”

Therefore His Excellency said, “This is a vicious circle that we must break. If not, the valuable work of early career researchers is rendered fugitive. Of fleeting concern to examiners it quickly disappears out of conversation and is hidden away in library stacks. We must break this vicious circle and enable the world to have direct access to the valuable work of young researchers – the inventive, daring, imaginative results of their painstaking endeavors”.

Addressing the audience, he said, "This is why your work at this conference is so important. You enable postgraduate theses and dissertations to be located, accessed, and used across the world. You trigger the processes through which the new work of young people can be read, cited, and promoted, globally. Your conference agenda covers the practicalities of research digitization, of cooperation between university and national libraries across the world, and of creating the tools that help us search for new studies in our areas of interest, in all countries of interest, and in all languages”.

His Excellency was keen to point out that “During the pandemic digital technology enabled us to continue traditional activities in new ways. But it also gave rise to new possibilities for how we do our research work, who we work with, and where this work takes place. Therefore your work on digitization, archiving, and promotion of theses and dissertations supports greater collaboration, cooperation, and circulation of the imaginative research and it promotes the profile of our young scientists. It connects both the early career and the established researcher. And it connects the global south and the global north of higher education, overcoming barriers of unequal resources.

His Excellency expressed his pleasure that the United Arab Emirates University can host the conference, and his joy and appreciation for the patronage of His Excellency Juma Al Majid.

He explained to the audience that H.E. Juma Al Majid would be their first keynote speaker and the Juma Al Majid Center for Culture and Heritage would host a workshop after the conference. In presenting H.E. Juma Al Majid to the audience, His Excellency Zaki Nusseibeh said, “The Juma Al Majid Center for Culture and Heritage is dedicated to the preservation of world heritage and to the cultivation of Arab and Islamic culture. It is one of the institutions through which the UAE exercises its role in promoting civilized communication, and the values of peace, tolerance, coexistence, and dialogue between religions. Over the years, the Center has pursued many initiatives to partner with institutions of other cultures and faiths. For example, since its inception, it has maintained excellent relations with the Vatican”.

His Excellency offered an historical account to the audience. He said, “I recall the praise of H. H. Sheikh Mohammed bin Rashid Al Maktoum, Vice President and Prime Minister of the UAE and Ruler of Dubai, for His Excellence’s pioneering role. He said: ‘Juma Al Majid is an honorable Emirati merchant and philanthropist. Very early on, he realized the importance of education. He advocates for education not only in the UAE but also in the Arab and Islamic world’”.

The Juma Al Majid Center contains a comprehensive library of works in the humanities, and the Islamic and Arab sciences. The Center is entrusted with a valuable part of the world’s publications and manuscripts. These include printed books, rare collections, scientific theses, historical and political documents, and rare periodicals. Its archives document the heritage and contemporary life of the United Arab Emirates. These archives demonstrate how the culture of the UAE combines tradition with modernity and has developed under the constructive influence of the cultures of over 200 other nations. It enables students and researchers to undertake research in its archives, with reasonable costs of access.

His Excellency said, ‘Therefore in this regard, I extend my appreciation and gratitude to His Excellence Juma Al Majid, who established this pioneering scientific research Center in the service of society. He experienced the founding years of the United Arab Emirates and is one of the pioneers who built the foundations of this country, whose 50th anniversary we celebrate this year. The UAE is proud of its pioneers, individuals whose hearts are filled with love and benevolence. His Excellence is a leading figure, a man of culture, thought, and charity. He founded the National Charity Schools and the College of Arabic and Islamic Studies. He is one of the founders of the Beit Al Khair Society. In 1999 he received the King Faisal Prize for services to Islam”.