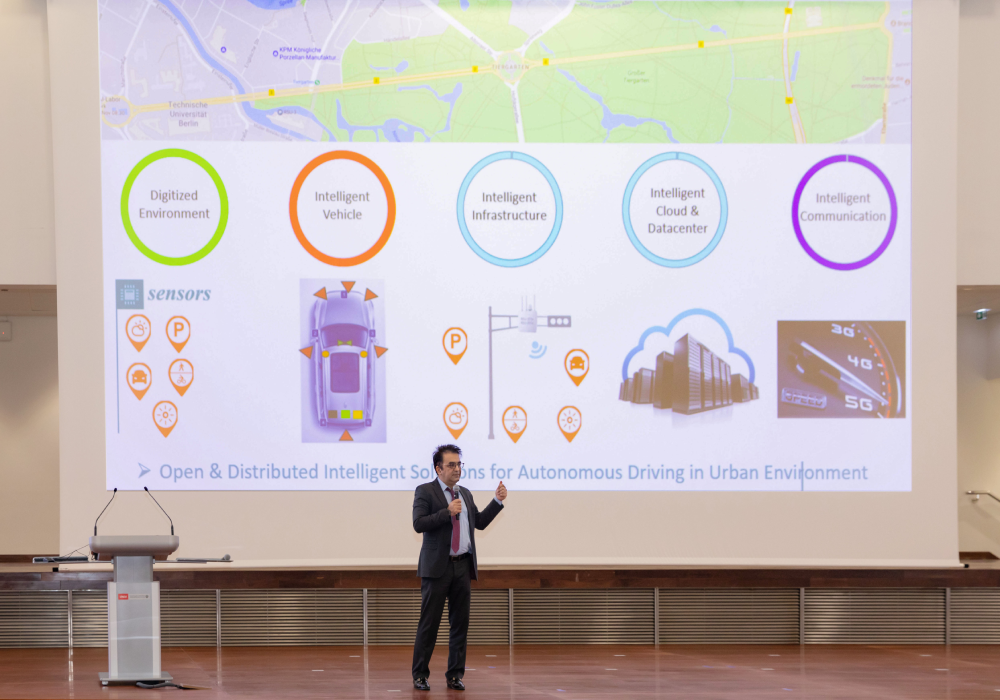 UAE University inaugurates the smart roads and autonomous ‎mobility project on 25th October. The project was ‎inaugurated by the Worthy Chancellor H.E Zaki Nusseibeh. ‎The ceremony was attended by honorable delegates of ‎different ministries, Abu Dhabi Police, ITC, RTA, industrial ‎partners, Research Provost UAEU, Director ECMR, and ‎researchers. The Smart Roads project is strongly supported ‎the UAEU authorities and co-funded by the Sandooq Al ‎Watan. This is an initiative and flagship project of Emirates ‎Center for Mobility Research (ECMR), which is led by Dr. ‎Manzoor Khan through the Connected and Automated ‎Mobility (CAM) research group of ECMR. The project will ‎be one of its kinds in the region and internationally, where the ‎roads of UAEU campus will be able to talk, listen, and make ‎decisions.  ‎

Dr. Manzoor Khan, Head of the CAM Research Group ‎ECMR & Project Manager of the Smart Roads Initiative at ‎UAEU explained, “The UAEU campus, which is equipped ‎with the latest infrastructure and road facilities, represents a ‎complex urban environment that allows creation of models ‎for Level 5 autonomous-driving,”. He noted, that the role of ‎stakeholders such as Equipment Providers, Authorities, ‎OEMs, MNOs, etc. in making roads smart, achieving the ‎highest levels of autonomous vehicles. He said, "The smart ‎roads project will make the UAEU a center for industry and a ‎specialized platform for bodies, academia and researchers‏."‏‎ ‎

Smart partnerships to lead the future

Dr. Manzoor Khan reviewed the prototypes of the solution ‎components for the Smart Roads initiative, which also ‎included technologies from SICK FZE, DELL, BENQ and ‎Cohda Wireless, and added that "some of the relevant global ‎industry leaders will soon be part of the activity and ‎development of the Smart Roads initiative and relevant ‎activities. Dr. Khan has been leading similar projects in ‎Germany and European Union. He stressed that the center ‎will be open to integrate other regional and international ‎partners in this activity – a simple e-mail to Manzoor-‎khan@uaeu.ac.ae will do the job. The support of the CAM-‎ECMR research team, and industrial collaborators, this ‎project will be one of the most prominent events regionally ‎and internationally‏.‏‎ ‎

He stressed that the project constitutes an important step in ‎the center's journey, which it started to develop the ‎infrastructure necessary for the use of autonomous vehicles. ‎The center started earlier this year in cooperation with the ‎‎"Bayanat" company for mapping, surveying and geospatial ‎data, which is affiliated with Group 42, a leader in the field of ‎Artificial Intelligence and commissioning of self-driving ‎vehicles to transport passengers in Abu Dhabi. It also ‎launched the Strategic Transportation Evaluation and ‎Assessment Model (STEAM +) system, which is an ‎advanced multi-modal system to predict transportation ‎demand rates. It uses artificial intelligence techniques and big ‎data analytics to support decision-making, guide the planning ‎process and prepare integrated comprehensive plans, which ‎contributes to achieving sustainable development goals‏.‏

He pointed out that "data analysis is critical to such efforts, ‎and the UAEU has the advantage of hosting a leading ‎research center in big data analytics. We are working to ‎collect and provide data necessary for common interests and ‎multiple perspectives in the field of transportation. It includes ‎applications of artificial intelligence, cybersecurity, business ‎policies and practices, manufacturing and engineering, legal ‎and political affairs, and health and safety, to meet the needs ‎of partners in industry and society, and in the broadest ‎spheres of human activity‏.‏

Dr. Khan reviewed the prototypes of the solutions ‎components for the Smart Roads initiative, which also ‎included technologies from SICK FZE, DELL, BENQ, ‎Cohda Wireless and Pride, as well as applications and ‎prototyping solutions including: the “smart tower”. The tower ‎was equipped with equipment to detect objects, activity ‎analysis, OBUs, computing infrastructure, and data centers. ‎

The UAEU roads will become smart through deployment of ‎smart towers and self-driving golf cars in the campus that ‎will become a unique model in the UAE and the city of Al ‎Ain‏.‏