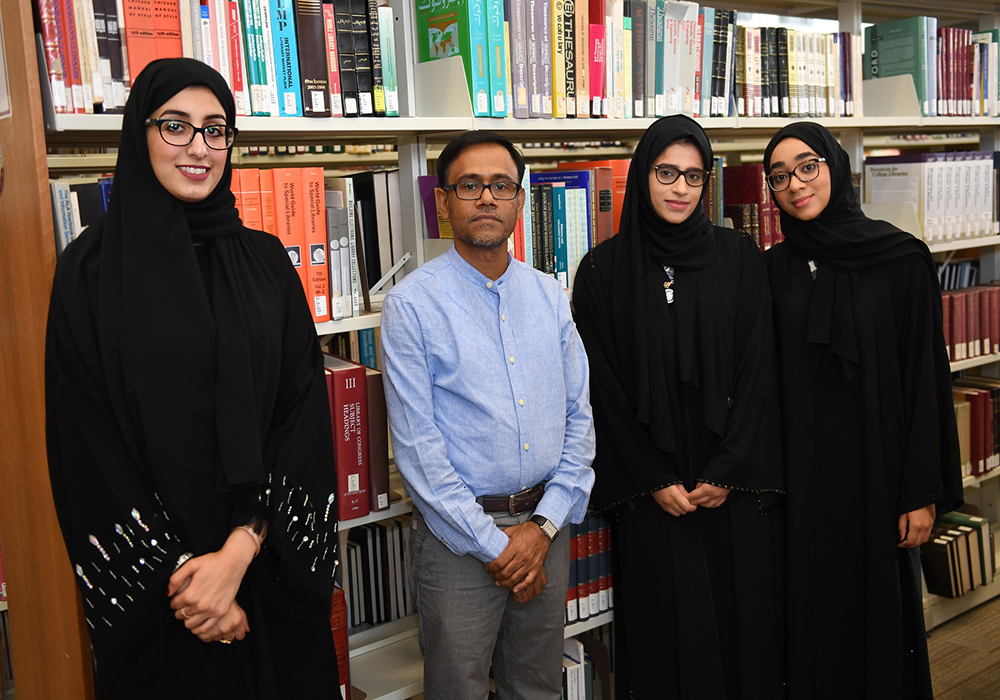 A UAEU-led study that quizzed hundreds of the university’s young female students about their eating and exercise habits has found one in three are overweight or obese - and poor sleeping habits, skipping breakfast, and a sedentary lifestyle are the root causes.

The research project was launched with the aim of identifying how weight issues among the university’s students compare to those throughout the UAE as a whole, and potentially providing a platform for raising awareness of the raft of health problems that can result from poor diet and not taking enough exercise.

Overseen by Dr Shahadut Hossain, Associate Professor in the Department of Statistics at UAEU’s College of Business & Economics, the study - entitled ‘Prevalence and the determinants of overweight and obesity among UAEU female students’ – entailed a cross-sectional survey targeted mainly, but not exclusively, at Emirati students aged 18-23. Data on height, weight, dietary and sleeping habits, physical activity levels, fast food consumption, and time spent on social media was collected from 290 participants through a questionnaire they filled out themselves.

The results showed that 31.4 per cent of those surveyed can be classed as either overweight or obese, with obesity being slightly more prevalent among Emirati participants (20.9 per cent) than among their non-Emirati counterparts (19.9 per cent).

Common chronic diseases to which obesity is a major contributor include Type 2 diabetes mellitus, coronary heart disease, hypertensions, gall bladder disease and gallstones, and osteoarthritis, while it can also cause or aggravate breathing problems such as sleep apnea and asthma. The prevalence of overweightness and obesity, especially among females, in Arabian Gulf countries has increased dramatically over recent decades.

“Obesity is a serious problem in the UAE,” said Dr Hossain. “There are many health problems related to obesity, so it is very important to study the issue to realise what the rate is among students, and compare it to the rate among the general population in the UAE.”

“Even though the rate among the female students at UAEU is almost half of the UAE’s national rate of female obesity, which stands at 60 percent, it is alarming considering the young ages of the study participants.”

The questionnaires were based on the Body Mass Index (BMI) and included questions designed to elicit responses about lifestyle choices that are commonly thought to influence whether someone is overweight or obese. As well as asking participants to outline their exercise levels and eating habits, it also focused on whether they get too much or too little sleep. “If people do not sleep enough, it’s likely they are sitting in front of the TV or a computer and doing something sedentary,” said Dr Hossain.

“If they are sleeping too much, they are not in a physical active state, and that can be a factor. People often don’t think about the extent to which poor sleeping habits have negative consequences for their weight. We also asked about lifestyle factors such as whether they take breakfast on a regular basis – if they are regularly skipping it, it is a very bad habit, and this was found to be a very common irregular dietary practice among the study participants.”

Participants were classified based on whether their BMI fell into the ‘normal weight’ bracket, which accounted for 68.6 per cent of those who completed the surveys. 23.8 per cent fell into the BMI’s ‘obese’ classification, with the remaining participants being classed as ‘overweight’.

The study found obesity was more prevalent among those:

Who skip breakfast (15.9 per cent, compared to 9.3 per cent among those who regularly take breakfast).

Who exercise less than three days a week (14.9 per cent, compared to 10 per cent among those who regularly exercise).

Who eat junk food more than four times a week (17.8 per cent, compared to 12.7 per cent among those who consume less fast food).

Who typically sleep for less than six hours or more than nine hours (19.2 per cent, compared to 10.5 per cent among those with regular sleeping habits).

The results, Dr Hossain explained, show a “very high” rate of overweightness and obesity among UAEU’s female student body. “This is a matter of concern,” he said, adding that he hopes to work with the university on developing initiatives that promote the importance of healthy eating and regular exercise.