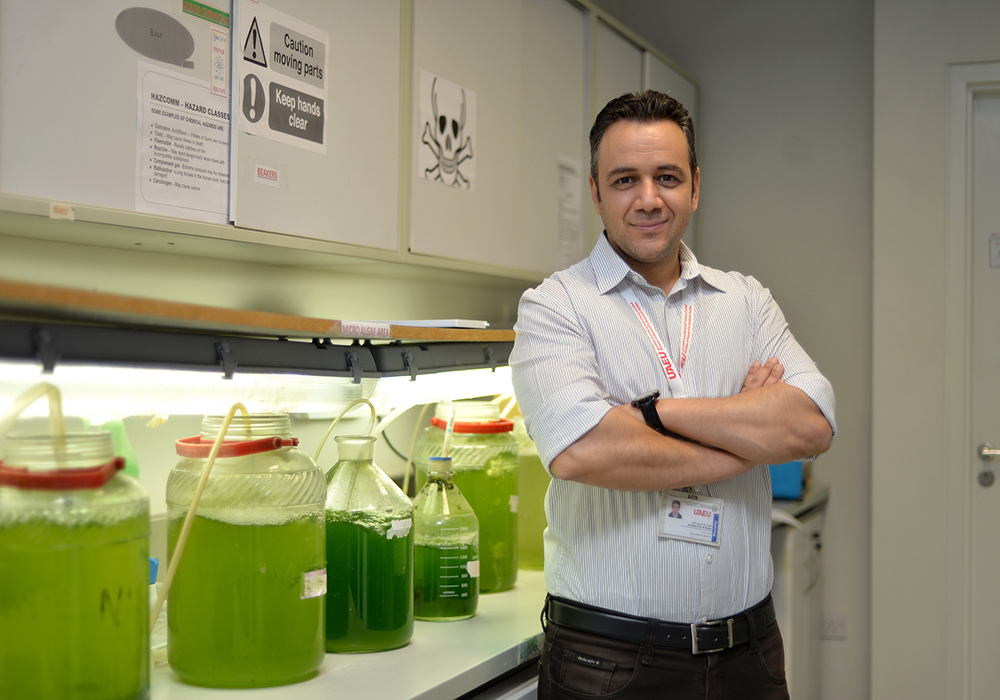 The process of making medicine from microalgae – and potentially developing new treatments for some of the world’s most serious diseases – could be boosted through a new discovery by an international research partnership that includes UAEU scientists.

A scientific research group affiliated to the university’s Chemical and Petroleum Engineering Department and the School of Biological Sciences at the University of Essex in the UK has devised a mechanism to extract proteins and pigments from microalgae, which can be used in the manufacture of medicine.

Macroalgal proteins and pigments have been effectively extracted using   an enzymatic  technique. Aligning with an intensive global focus on extracting medicinal material from natural sources, the group’s research is now turning to testing the effectiveness of the proteins and substances extracted through their method in treating cancer and bacterial diseases, which paves the way for the manufacture of this innovative strand of medicine.

Professor Sulaiman Al Zuhair, of UAEU’s Chemical and Petroleum Engineering Department, explained that research funded by medicine companies around the world is currently looking to invent and produce new, non-chemical treatment options that reduce the risk of potentially harmful side-effects of the chemically synthesized conventional medicine. For the project he is involved in, he says, microalgae – a single-cell organism – were considered to present a potential opportunity for medical discovery.

“Specific types of microalgae are used in the manufacture of medicine, which is our main subject in this scientific research,” he said.

“We evaluated the effectiveness of enzymatic treatment resulting from implementing the extracted proteins and pigments from microalgae, and compared innovative and organic natural extraction technique with traditional treatments, such as ultrasound waves and high pressured water.”

According to Professor Al Zuhair, enzymatic treatment has seen “many positive and successful results” from using the proteins extracted from the microalgae, which was not exposed to high temperatures. The ongoing research project, he says, is the latest step in a long relationship between UAEU scientists and studies of microalgae.

“These studies started in the Chemical and Petroleum Engineering Department in UAEU’s College of Engineering in 2010, for the purpose of producing biodiesel,” he said. “The research group succeeded in increasing the percentage of oil components from 12 per cent to 70 per cent”.

During deliberations and discussions in front of the research group from the School of Biological Sciences at the University of Essex, the different research parties agreed to consider and focus on other components present in the algae, in particular the proteins and colorful substances, for the purpose of using them in the manufacture of medicine.”

This area of scientific study began in 2014, with many of the algae species used for sampling being found within the UAE and some being provided by the Marine Environment Research Center in Umm Al Quwain and the University of New York in Abu Dhabi.

“Algae organisms are considered to be a source of human nutrient ratios,” outlined Professor Al Zuhair. “As well as being used in many industries – they are considered a rich source of oil that can be used to produce  biodiesel, and their development and cultivation helps to absorb carbon dioxide and treat industrial wastewater – they are known for their benefits in the medical field.

“They are included in the manufacture of medicine, the preparation of beauty and cosmetics products, and the production of different kinds of toothpaste. Algae microorganisms have many benefits to be exploited.”

The research team, he says, is now looking to pinpoint the “effective components and mechanisms” of the proteins and pigments extracted from the microalgae, and how the factors and conditions that increase their growth can be managed.

This work will help to define how effective they can be in treating major diseases, with Professor Al Zuhair saying: “This research has potential for the economic growth of the UAE and other countries, while having a multitude of advantages for human health.”