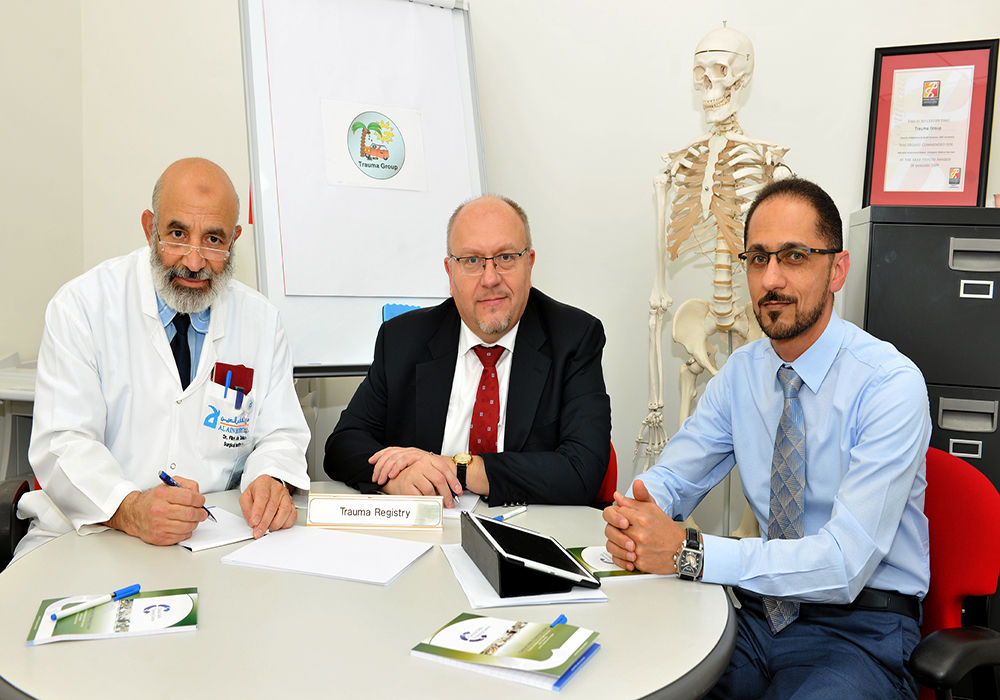 Young male Emiratis are more likely to suffer injuries on the roads, distracted and underage driving needs to be cracked down on, and a fresh approach should be taken to implementing educational programs for young UAE drivers – those are some of the key findings of a UAEU study into crashes and collisions that have led to lives being damaged or shattered.

Three members of the university’s College of Medicine and Health Sciences (CMHS) analysed all patients aged between 15 and 24 who were admitted to Al Ain’s two hospitals with traffic-related injuries, or who died as a result, over an 18-month period, and their findings and suggestions have now been outlined.

The study discovered that of the 333 patients whose injuries and circumstances were assessed – and who had an average age of 20 - 87% were male and 72% were UAE nationals, with “rollovers” being the most common form of crash and accounting for 14 of the 27 drivers of passengers who were thrown from the vehicle following the collision. It also showed an alarming reluctance of drivers and passengers to wear seatbelts, with use of such restraints being “extremely low”.

According to the UAEU research team – comprising Professor Michal Grivna of CMHS’ Institute of Public Health, and Hani Eid and Professor Fikri Abu-Zidan of the Department of Surgery within CMHS – the results of the study show that the promotion of traffic safety and the enforcement of road safety legislation is “necessary”, and there is “a need for implementation of culturally-relevant, evidence-based educational programs” for new young drivers and those who have been behind the wheel for some time.

“Despite legislation and increased enforcement in the UAE, the use of restraints among the youth is still very low. Information on traffic-related injuries requiring hospitalization for this specific age group in our region is highly needed. We aimed to study the epidemiology, risk factors and outcomes of hospitalized road traffic-injured youth patients in order to give recommendations for prevention.”

Pointing to the growing number of vehicles in the UAE and its expanding road network, as well as 2013 figures which estimated the nation’s road traffic death-rate to be 10.9 per 100,000 members of its population, as the basis for their research, the authors highlighted a series of “specific risk factors” for road injuries among young drivers. These included inexperience, emotional factors, overestimating their driving skills, greater willingness to take risks, and “response to peer pressure”.

Interviews were conducted with patients admitted to the trauma centers at Al Ain Hospital and Tawam Hospital following crashes between April 2006 and October 2007, or their caregivers, to obtain information about their demography and the circumstances surrounding their crashes. UAE nationals and non-nationals were both assessed, with the research discovering:

Opening up areas of discussion based on their findings, the authors wrote: “Young male drivers have a higher collision rate than women and their death rate is double compared with women.

“In the UAE, young women drive less and usually drive small cars, which are less prone to rollover. During cognitive development, the ability of youth to make safe decisions on the road is not mature. Adolescents are known to seek out risks while driving, and they have lower compliance with restraint use in our region.

“Despite legislation and increased law enforcement, seatbelt use remains low in our setting, especially among young UAE nationals. Only 12% of drivers and 4% of front seat passengers were restrained in our study. This poses a serious risk to all vehicle occupants. There is a high risk of severe injury and fatality for unrestrained passengers, especially in front collisions and rollovers.”

The report said that the low use of restraints was a contributing factor to the number of crash ejections, and also emphasized that head injuries were common among cyclists and motorcyclists who did not use helmets.

Meanwhile, the research team also highlighted that “distractive driving” is a major contributor to crashes, with 5% of the injured drivers surveyed having been using mobile phones when they were involved in an accident; and the fact that 8% of injured drivers were under 18, and 64% of the underage group were alone when they crashed. “Families ignore the need for a licence for short trips and use adolescents for bringing siblings from school and for shopping,” they wrote.

“Unlicensed driving is a major problem for traffic safety as it often correlates with high-risk behaviors such as speeding or failure to wear a seatbelt or motorcycle helmet. Unlicensed drivers were three times more likely to be involved in a collision than licensed drivers.”

The authors suggested “impaired visibility” and the chance to drive faster because fewer vehicles are on the road contributed to the fact that most patients were injured at night, and that the design of Al Ain’s road network “with long roads having three lanes between roundabouts” encouraged speeding.

However, they added: “The police and the transportation and health sectors in the UAE have made active efforts to reduce the burden of road traffic collisions over the last decade.

“This has included the introduction of new laws and regulations, enforcement of speed limits, improved road design, and educational campaigns. Plans are under way to introduce mandatory seatbelts for rear-seat passengers and child safety restraints.”

The authors also said that, while the study was a “specific time-limited research project” that analysed a period from 2006 to 2007, they believe “the risk factors for youth traffic injuries are still the same” in Al Ain.