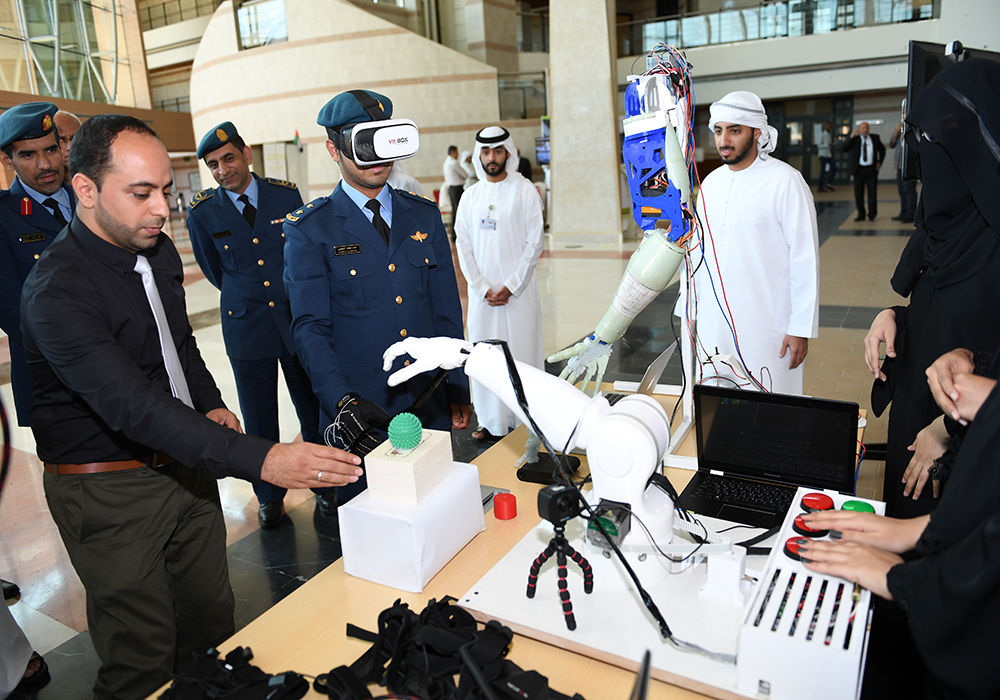 The human-like robot – which has the potential to become a tool for bomb disposal but whose use could also be extended into other areas – is designed to give its operator the same control and sensations as if they were using their own limbs, allowing them to feel whatever it touches.

The first stage of the project has been developed, designed and built by Dr Fady Alnajjar, assistant professor in the Department of Information Technology at UAEU, and his team of specialists, with the United Arab Emirates Air Force providing Dh55,000 funding for the initial stages of the self-controlled, avatar robot’s creation.

In the movie Avatar, remotely-controlled human bodies are used to interact with the inhabitants of a distant moon. For all the futurism of the film, the basic premise of this form of robot control is closer than you might think. And as Dr Alnajjar explains, the project he is leading could bring a new dimension to robotics because of its advantage over regular robots, which are remote-controlled and have limitations. It is intended to give its user the ability to feel they are touching or holding an object, without actually being there.

“The only way to sense a situation at present through using a robot is through vision – there is no sensory or tactile feedback from the environment,” he said. “Also, the user will only be controlling a robot’s hand using a remote-controlled tool, but that is not like using an arm – it doesn’t allow the same level of freedom, such as how far you need to open a hand and hold a grasp.

“When we control our own arm, we don’t have to think of this type of thing; we don’t have to consider how much freedom we need or how far to open our fingers to hold a cup or open and close and door. Our brains automatically control this.”

The UAEU project aims to, as Dr Alnajjar says, allow the person in control to simply act naturally in order to operate the robot. “We are building sensors which the controller can wear, and then all they need to do is move as if they actually are the robot,” he outlined.

“They don’t need to think about how they should lean to use the controller – they just move normally, and the robot mimics that motion. A human will have more control if it feels like they are actually using their own arm.”

Dr Alnajjar and his team of four students have worked for more than a month to construct the first stage of the robot - two human-controlled arms working via highly sophisticated sensors and modeled on the arm of a person in their mid-30s – in order to have it ready for showcasing at IDEX, the biennial arms and defence technology sales exhibition held at Abu Dhabi National Exhibition Centre in February.

“We cooperated with two companies as the arms are mostly constructed with three-dimensional parts, and we needed external help with 3D printers,” he explained. “Even one finger takes a day to print.

“We’ve so far built a left and a right arm, and we did this in different ways because we still need to discover how they can handle the kind of situation they would be used for. One of the arms has motors designed for heavy work, and one is designed for more accurate duties, such as separating two wires from each other.

“Once we show our work to experts such as the police, who deal with the kind of situations this robot may be used for, and they make suggestions to us, we will see which one we continue to build.”

At present, the robot has been developed using wires about two metres long, which are connected to the gloves used for human control. Ultimately, however, the goal is to use wi-fi or wireless technology to allow the robot to be controlled from up to 15m away without any physical connection. The team also plans to incorporate technology that allows the robot’s head – through a 360-degree camera – and upper limbs to be controlled.

“We are now looking to prove the concept that such a type of robot will give its user more freedom to control at less cost,” said Dr Alnajjar.

“At the moment, its functionality is at around 50-60 per cent. It now needs some fine-tuning in the field, and there is the potential for it be customized to meet the needs of a particular client. The benefit of 3D-printed products is that you can customize on request, as the technology is very sophisticated and very cost-effective – it is just a case of knowing how best to utilize it.

“The one key drawback is that the robot cannot carry really heavy objects, such as those made of iron. But we are not really targeting this as its use. With its potential to be used in bomb disposal, accuracy is the key requirement, and accuracy is what we are aiming for.”