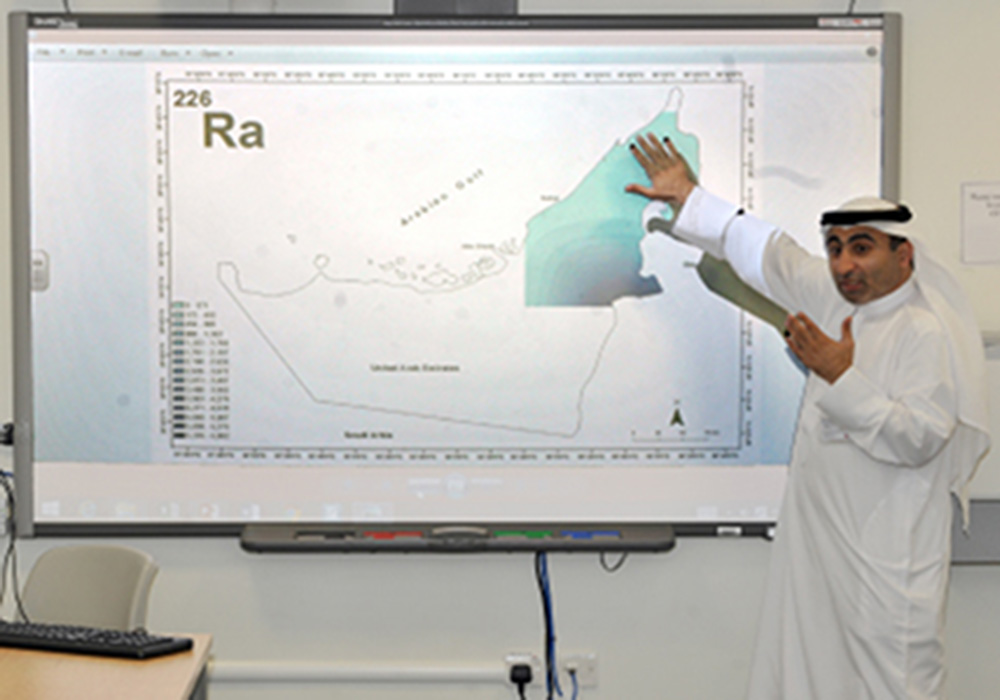 The College of Science at the United Arab Emirates University successfully launched the first phase of groundwater radioactivity mapping in the country on Tuesday December 6, 2016, in the presence of the Dean of the College of Science, Professor Ahmed Murad, the scientific research team, faculty members, and the college community.

The first phase covered the eastern and northern areas of the country. The mapping of radioactivity in groundwater is a vital and innovative research project to monitor water resources and baseline radioactivity in the UAE. The project started in 2012, and is driven by enthusiastic researchers with the goal of covering as much area as possible of the country by 2018. Several radioactive isotopes will be monitored in different groundwater aquifers. The project was designed in line with government policy for effective and sustainable management of water resources for future generations.

Professor Murad explained, "Launching the first phase of the groundwater radioactivity mapping project has strategic importance and is a national priority for the country. The mapping is the first of its kind in the region, and will play a prominent role in the provision of basic information as a preliminary database on the abundance of natural radioactive isotopes in the groundwater, and their impact on the environment. This data will help identify possible contamination from anthropogenic releases, which will support appropriate action to be taken by decision-makers.”

Professor Murad said that in this first phase, the groundwater samples were collected from 100 wells located in various areas and aquifers, and commonly used for farming and other agricultural purposes. Generally, the concentration of a radioactive isotope is expressed as Becquerel per Liter of water (Bq/L).

The radioactive isotope data and maps were prepared in the laboratories of the Department of Geology at the UAEU. The scientific research team includes Professor Ahmed Murad, Dean of the College, Professor Ala Aldahan, Dr. Dalal Al Shamsi, and Dr. Saber Hussein. The analysis of the groundwater was conducted at the Center for Nuclear Technologies of the Technical University of Denmark, under the supervision of Professor Xiaolin Hou, a specialist in radioactivity measurement.

Preliminary findings showed that the concentrations of radioactive isotopes measured in the groundwater in the first phase were, in most cases, lower than the permissible limits for drinking water suggested by the World Health Organization.

The initial focus of the first phase was on carbonate rock aquifers, and modern Quaternary sediment aquifers. This first phase will continue until 2018, to include the measurement of 500 wells distributed over different parts of the UAE, and covering the different major aquifers.

The research would not have been possible without the generous financial support of the Emirates Foundation and the United Arab Emirates University. This support helped the research team to achieve the project mission of providing research solutions in strategic areas of the country. There is no doubt that the research team could strongly benefit from the partnership of concerned authorities to enhance the wealth of knowledge and sustain the environment.