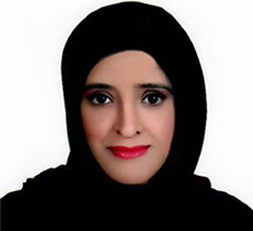 When Azza Al Otaiba first joined the United Arab Emirates University’s College of Business in 1999 to study accounting, she never imagined she would one day be the first female Emirati to manage 1,600 students and 200 staff.

In her last two years at the university, Ms Al Otaiba started volunteer work in two of its departments – Advising Unit & Internship & Career Development Unit. She was then hired in the Career Department as a Training & Internship Specialist , where she spent two years before being promoted to an Alumni & Student Development Manager in the College of Business.
“I was there from 2008 to 2011,” she said. “I then moved to the Institute of Applied Technology because I wanted to move to Abu Dhabi and because of the career options available to me.”

For the following two years, she was an Alumni Supervisor. “I was promoted to Vice Principal of Operations  in AL Ain for 2 years, followed by Principal of Alqabyiev campus from 2014 till now. I was the first female Emirati to hold this position, it used to be only for foreigners. I have been working there ever since.”

The position came with great responsibility, especially for a young woman of 32 years old – managing 1,600 students and 200 staff, as well as the institute itself. “I feel very proud of myself,” said Ms Al Otaiba, who is now 37. “At the same time, this is a big challenge for me because I need to prove that I can fulfill the responsibility they gave me.”

And the number of people she manages is constantly growing, an activity she says she enjoys. From operations to academics, Ms Al Otaiba is in charge of a vast amount of work – she must ensure the daily process goes smoothly for students, parents and staff, while ensuring the material is appropriately handed over to students and making sure they adapt to their curriculum.

From the beginning of the year, she starts recruiting and making campaigns for students to enroll in the institute’s schools, through school visits and presentations.

She also has to manage a variety of different nationalities and cultures from the academic and administrative staff. “I had to learn how to deal with all these different cultures, but it wasn’t difficult,” Ms Al Otaiba said. “I think, with my personality, I can be in these situations with people and I’m pretty flexible.”

Her family expressed great pride in her feat. “It runs in the family,” she went on. “My father used to be the Minister of the first Petroleum in the UAE, around the 1970s, and then he was the advisor of Sheikh Zayed, the founding father of the UAE, and of Sheikh Khalifa bin Zayed, the President of the UAE.”

Other family members are also high achievers, holding leading roles globally, with her brother, Yousef Al Otaiba, who is currently the UAE Ambassador to the United States.

For Ms Al Otaiba, the path she took exceeded all her expectations. “I didn’t expect to work in schools,” she said. “I thought I was going to continue at the university level only, which was one of the challenges because the school experience is different to university where you deal with specific people, and you have less people than in schools.”

She sees herself in her position for the long-term, being able to provide the institute with stability, experience and expertise she acquired over the years.

Her advice for current students is, “work in a job that believes in change for the better, where every day, there is something new and challenging.”