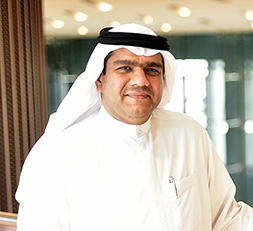 When he walked through the doors of United Arab Emirates University (UAEU) in 1996, Dr. Amer Sharif never realised he would continue his studies at the flagship institution for two decades - from Bachelor of Medicine student to a PhD graduate - all the while helping put his country on the map for healthcare.

As the CEO of the education sector within the Dubai Healthcare City Authority (DHCA), which oversees the development of the Mohammed Bin Rashid University of Medicine and Health Sciences (MBRU), Dr Sharif has broadened the reach of MBRU, established in 2014 to advance individual and community healthcare status in the UAE.

Beginning his studies in medicine, Dr Sharif said when it came to selecting a university in which to pursue his studies, the answer was an easy one. “UAEU is a model organisation and it is the model university for the nation,” he said. “So it was an absolute honour just to be accepted as a medical student. I spent eight years in Al Ain and it was the best moments of my life. "Myself and my fellow students were lucky because we were at the new faculty building for the College Of Medicine and Health Sciences - we were the first batch who used that facility.”

After finishing his Medical Degree from the College of Medicine and Health Sciences (CMHS) from the University, Dr Sharif became a teaching assistant in medical education at the UAEU.

“I was the first UAEU national who was a teaching assistant in medical education,” he explained, before he made the move back to the emirate of Dubai where he has since enjoyed a stellar career at the helm of many government healthcare departments. But his affiliation with the UAEU continued.

“I was a student of the UAEU until last year, so you can consider me a student from 1996 until 2016 when I completed my Doctorate of Philosophy (PhD) in Mapping the UAE Health System: Challenges and Recommendations from the UAE - which I started in 2010,” he said. "I was the first student to graduate from the medical school in the UAEU and to do a PhD in the medical school. I maintained a relationship with UAEU through alumni and through participating in many of the events and programmes and I was also excited to become the first general co-ordinator for alumni of the College of Medicine and Health Sciences."

Dr Sharif said his long affiliation with the university is one he holds close to his heart. “Every moment I spent at the university was a special one,” he said. “It was not just the studies but activities outside studies too. I was part of the medical students association, so we got involved in sporting and social activities. It felt like a home away from home. It has been 20 years of exciting moments."

During those 20 years, his career has flourished. Having also completed a Master of Science (MSc) in Healthcare Management from the Royal College of Surgeons of Ireland (RCSI), in 2005 Dr Sharif began working for the Dubai Health Authority, joining the office of the Assistant Director General.

“It was a big learning experience for me,” said Dr Sharif, explaining he had moved from a teaching role to a more management position. “I was going into a role that helped oversee the whole (healthcare) position."

Dr Sharif went onto hold many more titles at the healthcare authority, including Director of Human Resources and Director of Healthcare Operations at the DHA, while he was also involved in helping establish several key projects in the Dubai medical sector. Ultimately, he became the CEO of the Education Sector at Dubai Health City Authority, while also securing the role of Vice Chancellor of the Mohammed Bin Rashid University of Medicine and Health Sciences, which he describes a “like a dream come true”.

“It has always been a dream to help create and develop a healthy workforce of the future and develop an integrated academic health system that acts as an umbrella that will network with healthcare providers, with researchers, and with healthcare professionals across the system,” he said. “Establishing a new medical university in Dubai is something you won’t get often in your lifetime, so I think this has been the highlight of my career until now and I am very grateful to the leadership of the country and to the UAEU - who have given me all the skills and knowledge to be in this place today. If it was not for the UAEU I would not be in this place.”

Given his long affiliation with the university, when asked if he had any words of wisdom for any current students, Dr Sharif said: “Know that every day is a significant learning opportunity. Work hard, be respectfully ambitious, learn from others and create connections from day one. As much as you can, collaborate with colleagues and benchmark yourself with others and learn from others. And I think the UAEU gives a great platform to do that.”

Dr Sharif credits Sheikh Zayed, the UAE’s founding father, as his main inspiration and role model throughout his successful career.

“In this country we are inspired by our rulers,” he said. “Sheikh Zayed was a very visionary person; if it was not for him and the wise leaders who came together with him to establish the country we would not be in this situation we are in today. We are leading the world today in certain areas - that is credit to the visionary leadership we are blessed to have in our country.”