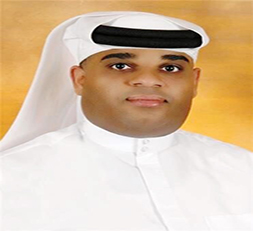 Dr Mohammed Sulaiman Mohammed Al Hammadi is part of an elite team upholding the laws of the UAE and protecting the rights of its people - and as he carries out his work with pride, he is quick to salute the role that United Arab Emirates University (UAEU) has played in his legal life.

As an advisor and Chief Prosecutor for the Attorney General’s Technical Office - International Judicial Cooperation Unit at Dubai Public Prosecution, Dr Al Hammadi holds a key role in his home nation’s mission of building a fair and secure community, where freedom, justice, independence, and partnership are the watchwords.

His 17-year legal career has seen him hold many pivotal positions – in addition to his current post, he has been a legal lecturer and an expert specializing in international arbitration in commercial and banking disputes and international cases – and amass a portfolio of achievements. And he credits his time at the UAE’s flagship university for steering him towards this successful career path.

Having developed a keen interest in the criminal justice system and its importance in protecting human dignity and upholding human rights, Dr Al Hammadi commenced his studies at UAEU in 1995, graduating in 2000 from its Faculty of Sharia & Law.

The UAE national said he chose to pursue his higher education at the longest-established - and highest-ranking - university in his home country because of its distinguished international faculty, and its local and global stature.

"I chose UAEU as it enjoys a good reputation and holds a prestigious position among many universities,” explained Dr Al Hammadi. "The reason for choosing the specialization of Sharia & Law was my personal desire and inclination, and reflected my search for excellence in the field of law.” Dr Al Hammadi retains fond memories of his time at UAEU, and describes receiving his Bachelor’s degree as one of the highlights of his life.

“The time of my graduation from the university was the happiest time,” recalled Dr Al Hammadi, who was invited by UAEU to participate in the College of Sharia & Law’s 2017 graduation ceremony as an example to students of how their education at the Al Ain institution gives them a grounding in excellence.

"I consider the UAEU's Faculty of Sharia & Law to be the source from which I gained my knowledge and understanding of the sciences of the legal system. My time at the university helped me to build my legal capability, and provided me with guidance in my future.
“It helped me to determine which occupation best suits me, and that led me to my position in the Dubai Public Prosecution as a prosecutor - a position which I am very proud of.”

In addition to his Bachelor’s Degree from UAEU, Dr Al Hammadi's educational achievements include a Master’s Degree in International Law from Australia's La Trobe University, a Doctorate in Philosophy in Private Law from the University of Sharjah, a Higher Diploma in Legal and Judicial Sciences, and a Diploma in Criminal Sciences from the Dubai Police Academy. He continues to participate in many workshops, conferences, symposia, and specialized and general training courses.

"I am very proud to have been a prosecutor since 2002, and the progression I have made along my career path,” he said. “This has led me to occupying my current position in the technical office of the Attorney General in the unit of International Judicial Cooperation, which is designed to look into various international requests in the field of international judicial cooperation, including extradition requests and judicial assistance requests. “This is all thanks to the help I have received from higher leadership, my directors, and my colleagues, and their trust they have placed in me, as well as my own efforts. That is what I consider to be my biggest achievement.

As an alumnus of UAEU, Dr Al Hammadi maintains a strong relationship and association with the university that has played such a key role in his life to this day. And he has advice, and a message, for its current students. “Always have faith in Allah, trust yourself, and trust others,” he says. “This is the biggest incentive and motivation for you to achieve what you seek, and what is sought from you. "Whoever strives for the top, desires excellence, and seeks success has to work hard. They will only achieve their goals through perseverance and tireless effort.”