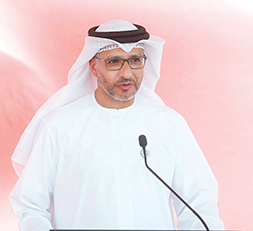 His Excellency Dr Yousif Alobaidli is one the most prominent figures in cultural tourism in the UAE. As the General Director of the Sheikh Zayed Grand Mosque Centre in Abu Dhabi and the Director General of the Founder’s Memorial for the late Sheikh Zayed, founding father of the UAE, Dr Alobaidli has been working arduously to put his country’s culture on the global map.

“We want to have a unique example by presenting tourism in the UAE, which has a very unique cultural aspect that will distinguish Abu Dhabi and the country in general from other destinations,” he said. “By focusing on this and enhancing cultural tourism, the economy of Abu Dhabi and the UAE will be further diversified and enhanced.”

HE Dr Alobaidli, who was born in Abu Dhabi, found his passion during his Doctorate of Business Administration (DBA) at the United Arab Emirates University. His five years’ studying covered a variety of topics, from business administration and innovation, to change management, human resource investment and corporate social responsibility. That laid the foundation for his thesis on cultural tourism in the UAE, with a focus on hiring and retaining Emiratis as tour guides. “The UAE and Abu Dhabi, in particular, is focusing on this sector,” he said. “With Saadiyat Island being developed as a Cultural District in Abu Dhabi, it now hosts the Louvre Museum and many other projects are in the pipeline. This will add to the existing assets, such as the Sheikh Zayed Grand Mosque, one of the most popular attractions in the world, which was nominated second best landmark in the world according to TripAdvisor in 2017.”

His time at the university, from which he graduated in November 2017, proved vital in supporting his role in this sector. “The programme is very well renowned, especially in the UAE,” he said. “It has a very high standard and the DBA is very practical as it covers almost all topics in Business. What’s good about it is that, when you conduct your thesis, it has to relate to something practical, so you’re tackling a practical issue within your field.”

He said that helped improve not only his academic side, but it also helped develop in him a deeper understanding of the field he specialised in. “Personally, I have an interest in matters related to culture and my background is related to developing new organisations, particularly businesses that focus on cultural tourism and visitor experience,” said Dr Alobaidli. “It’s important to keep the UAE’s culture alive.”

Upon his graduation, he further delved into the field, managing crucial cultural destinations across Abu Dhabi, under the umbrella of the Ministry of Presidential Affairs. “Thanks to my specialisation in managing cultural tourism entities, and my study with a focus on engaging Emiratis to participate and contribute to this important sector and make it more sustainable, my contribution and my study helped me enhance this aspect,” he said. “We’ve achieved great progress in this regard and are going to achieve more.”

His main drive is to build a model for managing cultural tourism that is sustainable and utilises national assets, as well as Emirati human resources, which will help in turn to diversify the UAE’s economy away from the oil sector. This is aligned with Abu Dhabi’s 2030 Vision. “It’s really important because, for the UAE to have a more sustainable income and future, it has to diversify its economy and utlise all national assets, including Emirati youth,” he added. “One of the most significant elements globally, based on WTTC, shows that tourism is the largest sector that hires people, creates jobs and it is one of the sectors that has a great effect on other sectors of the economy, including transportation, travel and the hospitality industry. This sector is expected to grow faster than the wider economy and many other industries over the next decade and it is anticipated to support over 370 million jobs by 2016.”

He said the UAE had the necessary assets to invest in tourism, in particular in cultural tourism. “My job is to help put the UAE on the global map,” he said. “The country has so much to offer and it’s time for people around the world to pay closer attention to that – this sector will truly be a game-changer in the future.”