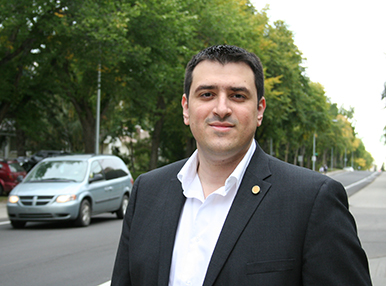 Removing the Boundary Between Student and Professor

“Working with the students. That’s the best part of the job,” explains Dr. Karim El-Basyouny, speaking about his position as associate professor in the University of Alberta’s (UofA) Civil and Environmental Engineering Department. “Knowing that at some point in their graduate studies, I helped them discover their true passion and professional identity that will shape their future career.” And his dedication to his work is evident by the achievements of both himself and his students in the field of transportation engineering.

An authoritative researcher, respected member of UofA faculty, the inaugural City of Edmonton Research Chair in Urban Traffic Safety, and a founding member of the Centre for Smart Transportation, surprisingly, Karim did not intend to become an academic when he began his Bachelor’s degree in Civil and Environmental Engineering at United Arab Emirates University (UAEU). “Coming into the university I never thought of myself as someone with a future in academia,” he explains, and instead he intended to go into the work force after graduation. But his success as an undergraduate produced unexpected opportunities. “The university changed my outlook. It was studying, interacting with the professors, and achieving academic success that gave me the motivation to pursue graduate studies.”

In 2003, after graduating from UAEU with distinction, Karim spent time working as a university research assistant, investigating the environmental regulations, impact on health and environment, and available methods for calculating fugitive dust externalities, before moving onto graduate studies. Unbeknownst to him at the time, aspects of this work were preparing him, in part, for his eventual career. “The research process especially paper and grant writing were things that came naturally to me because I had a lot of training,” he says, speaking of both his time at UAEU and his professors with respect and appreciation. “I think having access to those individuals, and their expertise really helped.”

In 2004, Karim moved to Vancouver, British Columbia, Canada, to begin a Masters of Applied Science and subsequent doctoral degree at the University of British Columbia (UBC). He attributes his time at UAEU for affecting this decision. “The UAE is known for its cultural diversity, which I was exposed to at a very young age. While searching for places to conduct my postgraduate degree, I wanted to continue living in a country that offered the same type of cultural acceptance. That led to my decision to study and subsequently live in Canada.”

And although graduate studies alone bring their own difficulties, moving from the United Arab Emirates to Canada—away from his family and community—introduced an additional set of complications. “I think there is always a challenge associated with moving to a new place. So moving to Canada and pursing a graduate degree away from my family was something that took getting used to, but once I adjusted I found that my transition was seamless,” he explains. “The UAE is very multicultural. Coming to Canada it felt almost the same. Growing up in the UAE, I was used to living in a diverse community with people from different backgrounds. And I felt that was something that really helped.” But going to a new place, with a foreign culture is always challenging, and some students—even those whose academics put them at the top of their classes— sometimes cannot get past these challenges.”

Karim describes his first six to seven months alone, “trying to meet people, along with studying and taking graduate courses. It was a tough start. But I think … going back to the culture of the UAE, and the fact that I’ve always been around international students from everywhere around the world, even at the university. That really helped.” His resilience and perseverance paid off and in 2011 he graduated from UBC with a Ph.D. “And even despite that, I never thought I would be an academic,” Karim laughs. So, as originally planned, he went into the workforce, which brought more relocation: a move to Alberta to work with the City of Edmonton. A complex role, it called on much of the knowledge he had acquired throughout his years of study, including the solid foundation he attributes to those first years at the UAEU.

It was after almost a year of working with the city that Karim began to realize he preferred the kind of freedom that comes with a career as an academic, “More control over my time. And more control to work on projects that interested me.” And it was around then that he joined the University of Alberta as a member of the faculty. “The first year was me trying to figure my way through the job. There was a lot to learn” he describes with a relaxed sureness. But in time, the work he was putting in became evident as the number of students registering in transportation classes began to rise from an average of 20-30 to 40-50. And around 2017 he was promoted to associate professor and given tenure. “It’s been a very rewarding journey working with the people. Launching careers of individuals. Either in the Masters or though PhDs. Seeing them get hired the in industry, or with the government. I draw a lot of inspiration from that.” He pauses a moment, “And my colleagues. They are wonderful people to be around. The environment is very healthy. We all get along and have very high regard for each other.” Karim also compares this to his time in undergraduate studies. “That is another thing I noticed about the UAEU. They were a solid and cohesive faculty.”

Despite his achievements, Karim has at least one more milestone to reach in the foreseeable future, “Getting to professorship. Once I’m past professorship, it might be a good time to reevaluate and see where things are going to go.” Karim sees the core work he does as a professor for the university continuing—working with the students and his colleagues, and publishing papers. But he also recognizes a distinct place for his research in practical applications. “Not everybody gets a chance to do work that can have an applied appeal to it. I feel this is something I might be interested in pursuing in the future.”

When asked if he had a piece of advice for current and future students, he emphasized the value of the relationships, “The Engineering Faculty members at UAEU are among the world's most talented academics. They come from diverse backgrounds and they are graduates of some of the top engineering schools in the world. Getting to know the professors helped remove that imaginary student/teacher boundary that resulted in long-term friendships while kick-starting my graduate degree. It was through my professors that I made contacts in both US and Canadian Universities that facilitated my transition to start my post-graduate degrees.”