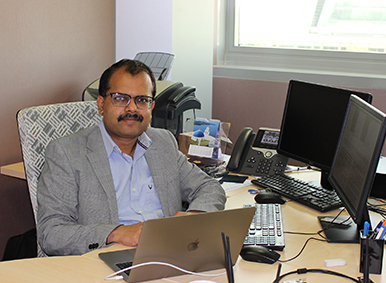 Dr. Parag Kulkarni joined the Department of Computer and Network Engineering, College of Information Technology, UAEU as an Associate Professor in Jan 2018. Before joining UAEU, he spent a decade at Toshiba’s Telecommunications Research Laboratory (TRL) in Bristol, UK where he led a team of researchers and was actively engaged in research, intellectual property generation, technology transfer, standardization and outreach activities in wide ranging areas such as Internet of Things (IoT), Machine to Machine (M2M) Communications, ICT for sustainability, smart cities, urban mobility and next generation wireless systems. He is a co-recipient of the Toshiba Research and Development Center Award for his work on wireless mesh networks for smart metering which made its way into a product and for which he was also nominated to represent Toshiba Corporation along with the Chairman and CEO of Toshiba at the inaugural edition of the prestigious Queen Elizabeth Prize for Engineering event held at Buckingham Palace in London.

During his tenure at Toshiba, he also participated in internal and external collaborative European projects spanning partners from industry, municipal authorities, public utilities, academia and research institutions, working with consortia to bid for and deliver on projects. He is broadly interested in technology and the role it can play to solve problems in different domains and associated commercialization aspects. He is a (co)inventor on over a dozen patents, has supervised close to a dozen Masters thesis for students at the University of Bristol, UK, has published work in top tier journals, magazines, conferences and continues to actively contribute to the research community in various capacities such as industry forum speaker, panelist, conference chair, program committee member and reviewer for several conferences, journals and magazines.

Since joining UAEU, he has been focusing on the smart connected systems area. Breakthroughs in technology, shrinking costs and form factor, commoditization of equipment, emergence of ubiquitous connectivity and the convergence of computing and communications have led to the emergence of smart connected systems powered by the Internet of Things (IoT). The number of connected devices has already surpassed the number of inhabitants on this planet and this number is likely to further proliferate moving forward. This paradigm manifests itself in a myriad of applications such as smart cities, intelligent transportation systems, smart grids, industrial and critical infrastructure monitoring, low cost e-healthcare, logistics, home automation, safety etc. The promise of enhanced quality of life, better access to and efficient utilisation of resources through operational efficiencies, ways to create new businesses, new revenue streams and establish a proactive engagement with different stakeholders in different domains has resulted in an overwhelming embrace of this paradigm. Being an ardent follower of the applied research pathway, Parag’s work focuses on projects which involve proof-of-concept development and design and deployment of pilot trials to uncover insights to solve practical problems. As a part of a project funded through the UAEU startup grant, he is currently exploring the role of technology driven interventions to leverage opportunities for operational optimization, which could be realized through deployments in the UAEU campus. One of the other objectives of his work is to understand the economic feasibility, scale-up and cost vs benefit tradeoffs of the various interventions so as to devise cost effective solutions. Outside of work, he is an avid reader, traveler and revels in nature and wildlife photography.