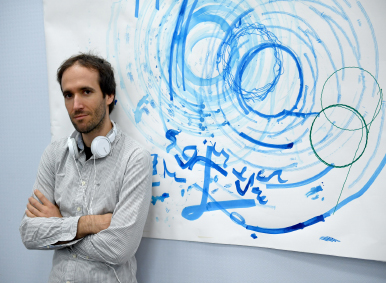 The robotics and media laboratory at United Arab Emirates University (UAEU) is where you will find Dr Jose Berengueres connecting art with state-of-the-art. As Assistant Professor at UAEU’s IT College, the Barcelona native with a PhD in bio-inspired robotics is seeking to bridge the supposed gap between art and technology by demonstrating how they intertwine and open up new horizons, and inspiring students to combine technical and mechanical work with allowing their imagination to flow freely. Projects in the lab that Dr Berengueres leads are focused on four areas – art and tech, creativity research, data science research, and robotics research – and activities range from crunching numbers to encouraging recycling to building a camel-sized robot that react to students according to its mood.

It’s a diverse environment, and one that reflects the world’s unfolding path, as Dr Berengueres, who also holds a Masters in Electrical Engineering, explains. “I believe in mixing art with technology – without doing this, you are missing out not only on a lot of fun, but a lot of meaningful research,” he says “Pixar created hit movies and hundreds of highly-skilled jobs, but also pushed the technical boundaries of how computers could entertain humans. The graphic cards developed for 3D gaming have made things like the Tesla autopilot self-driving car possible. And in our lab, we are using ‘nerdy’ gaming devices for research on a new AI field called deep neural networks – because it’s the only way to do this research. “We have also developed the Artistic Robot, a graffiti-making robot that produces paintings in the style of Jackson Pollock and which we see as an augmented brush for artists. All of this shows how, at the IT College, we love to combine art and technology.” This approach is also having a big, visible impact on UAEU life. Students have used 360-degree cameras to showcase the campus to visitors in an innovative, immersive way, and created a “smart bin” that smiles at and thanks those using it – the result being that recycling rates soared by 300%.

This commitment to creativity extends into Design Thinking, an increasingly popular course within and beyond UAEU. “It is a thinking framework that enables teams of people to be more creative – what we call ‘group IQ’,” said Dr Berengueres, who has taught Design Thinking and Business Models Innovation in Dubai, California, Germany, and Mexico. “We realized there were no really good textbooks available to teach it, so – with input from students – we published an e-book called ‘The Brown Book of Design Thinking’, one of the first textbooks tailored to undergraduate students. It led to me giving workshops around the world, and writing ‘Sketch Thinking’ [an Amazon top 100 creativity bestseller], which is used to teach how to quickly sketch ideas. We’re currently researching how the layout of meetings influences the ‘group IQ’.” The lab’s dedication to data science has seen it collaborate with Etihad on a project to predict which customers will eventually become gold members; with Singapore-based Healint LLC, maker of migraine-coping app MigraineBuddy, on a model to gauge when the condition will strike and how environmental elements such as pollution affect migraine rates; and with HappyForce, a Barcelona startup, on a tool for predicting the likelihood of employees quitting, allowing companies to address the situation.

A specific research group has also been formed to tackle the task of making large amounts of data make sense. “Academically and professionally, this is an expanding field, for two reasons – new algorithms and faster computers,” outlined Dr Berengueres. “Our group helps researchers with data they do not necessarily know how to model, with the goal being to streamline computing procedures in order to conduct research faster and with more impact.” Another burgeoning global field – robotics – is also a core element of life in the lab, through its research into human-robot interaction. “It’s a mix of user experience, psychology, and robotics itself,” says Dr Berengueres. As part of a joint collaboration with Sendai University, we are now building something that has never been built before: a robot with a superhuman sense of touch. Imagine a robot that can tell if you have fever or malaria just by shaking your hand, for example. Robots can be scary sometimes, but the goal of robotics is to make life better for humans.” Outside the lab and into the community, Dr Berengueres is a sharer of knowledge, insight, and experience. An ex-entrepreneur himself, he says: “I mentor future entrepreneurs at StartUp Weekend Dubai, GEMS Academy events, or by teaching a workshop at places like FabLab, and I also founded the Dubai Design Thinking Meetup as a way of discussing current trends. “A duty of every faculty is to give back to society in the form of service. For me, this is a particularly rewarding way of giving back.”