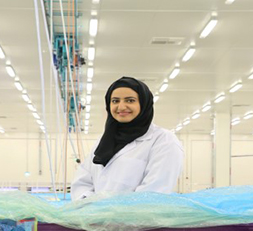 Maryam Al-Kuwaiti is listed as one of the most influential women in 3D printing.  The 25-year-old engineer played an important and integral role in the development and realization of the United Arab Emirates’ first 3D printed aircraft interior components. The female engineer has been recognized as a pioneer in the UAE’s additive manufacturing aerospace initiative.

More specifically, Al-Kiwaiti works for Strata Manufacturing PJSC’s joint initiative with Siemens and Etihad Airways which is aimed at producing 3D printed aircraft parts. Her background includes a bachelor’s degree in mechanical engineering from the UAE University, internships at the University of Oxford, California-based GlobalFoundries, and at the Airbus base in Toulouse, France.

As a prominent female engineer in the UAE’s aerospace industry, Al-Kiwaiti is hoping to inspire more women in the country, as well as across the Middle East to take on positions in engineering, 3D printing, and aerospace.