A Healthy Environment At The Forefront of UAEU Research

Although the earth’s environment took a much-needed break during the 2020 lockdowns around the world due to the COVID-19 pandemic, researchers at the UAE University (UAEU) are working tirelessly to help avoid further damage. And climate impact is one of the research areas that Dr Taoufik Ksiksi, Professor in Biology, is focusing on.

Climate change is one of the main challenges facing the UAE, the region and the world, particularly impacting the environment and, more specifically, terrestrial ecosystems that are very fragile in the country. As a result, any minor disturbance, including climate change, can impact the functioning of these ecosystems and the services they provide. 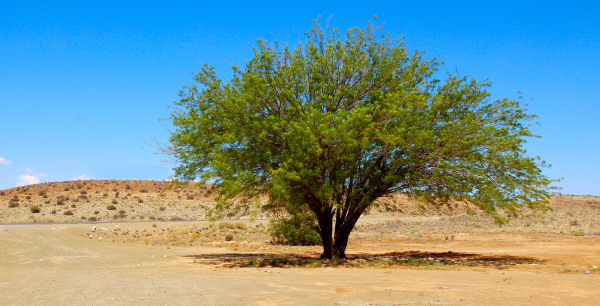 As part of his work, Ksiksi is looking at modelling species distribution across the UAE’s ecosystems as a function of how climate is going to change in the future. In that regard, he looks at the key plant species and finds out their preferred habitat based on current environmental conditions. Such research helps in understanding all the characteristics of their environment and, therefore, projects potential scenarios based on changes of temperatures and rainfall. “We predict that into the future and how the climate is going to change,” he explained.

Read Dr. Ksiksi’s paper on the invasion risk of the Mesquite plant

The project’s modelling is prepared to relatively accurately predict the climate, foreseeing which areas specific species will move or spread to, and which habitats are expected to shrink from the years 2050 to 2070. Such work, which includes both plant and exotic species, like the Ghweif trees, can greatly benefit decision-making as exotic species can compete with native trees, like the Ghaf.

Lastly, Ksiksi also focuses on CO2 enrichment research, due to an increase in carbon and climate change. For that reason, him and his team are evaluating the impact of a CO2 increase on the growth of plants. “One of the major findings is that we use CO2, which will increase as a fertiliser to improve plant growth, while saving water for irrigation,” he noted. “We reduced irrigation water and increased CO2, and found out that we can save 20 to 30 percent of irrigation water only by increasing CO2 and the growth areas where the plants are.”

This is performed by applying CO2 to greenhouses where food is grown. And with the UAE gradually shifting towards soil-less greenhouses and agriculture, CO2 can prove beneficial when injected into these plants, as less water is used.

Another environmental area undertaken by researchers at the UAEU is microplastics and their effect on biological life. Dr Ruwaya Al Kendi, Assistant Dean for Research and Graduate Studies at the University’s College of Science and Founder and Director of the Sustainability Club, has been working in the field of water quality and, specifically, on microplastics. With not much research available in the Arabian Gulf in such an area – especially on the effect of microplastics on fish species or on biological life in particular, Al Kendi’s work is timely.

Along with one of her PhD students at the University, they collectively studied microbeads in cosmetic products that are commercially available in the UAE. After testing 37 common facial and body scrubs, they were astonished to discover that 11 were found to have microplastics within their content. “Others have some biological beads, made from cellulose and crushed walnut shells, but those are considered safe for the environment because they are biodegradable,” she explained.

The general study, which has been published in the Environmental Pollution Journal, focuses specifically on these 37 commercial cosmetic products to reveal their content, further helping the UAE Government to focus on the issue in an attempt to ban those that are considered hazardous for the environment – as many countries across the globe have done.

For Al Kendi, who is also Coordinator of the UAEU Sustainability Executive Committee and a UAEU representative in the Abu Dhabi Sustainability Group, such microplastics have a serious effect on the country’s seawater, should they be discharged before they are cleaned up from the wastewater. In countries around the world, including the Emirates, a single septic pipe from the household feeds into wastewater treatment plants, leading to a final reservoir before the water is discharged into the environment. As a result, microplastics are constantly being dumped in the water and the soil. In the UAE, matters are slightly worse off, as wastewater is used in irrigation. “So we do not know much about the availability of microplastics in the water after the treatment, whether it is being treated or not,” she said. “Students are looking at microplastics tracing in treated wastewater.”

The issue is critical, as it can strongly impact the marine ecosystem’s food web. As contaminants travel from one organism to another, all the way through the food chain. Al Kendi said it is assumed that microplastics are concentrated in fish or in any other organism that feeds on them, which also forms another part of her PhD students’ research in the food web. The goal is to evaluate the biomagnification of microplastics in UAE commercially available fish species. “We are now working on this part,” she concluded. “We gathered local fish and we will introduce microplastics to them to look at their concentration in the fish’s organs.”

Such work is particularly significant in the region, where microplastics can accumulate in the water sediments and marine organisms.