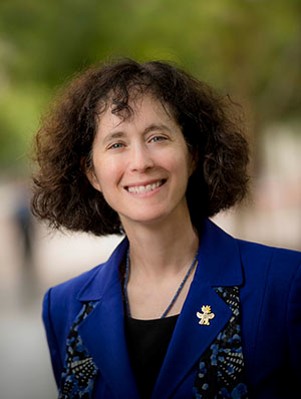 Dr. Elizabeth H. Simmons is the Executive Vice Chancellor for Academic Affairs at the University of California San Diego. In this capacity, she serves as UC San Diego s chief academic officer and is responsible for policies and decisions relating to all academic programs and curriculum, instructional support programs, and faculty appointments and performance. She is the institution s second-ranking executive officer and acts on behalf of the Chancellor in overseeing the University in his absence. Dr. Simmons previously served as Associate Provost for Faculty and Academic Staff Development, Dean of Lyman Briggs College, and University Distinguished Professor of Physics at Michigan State University (MSU). In her Associate Provost's role, Simmons led the Academic Advancement Network, which promotes an inclusive, proactive culture of professional development for all MSU faculty, academic staff, and academic leaders. Simmons served as Dean of Lyman Briggs College for over a decade and in 2004, successfully led the college on a 25% expansion of its student body, nearly 50% growth in faculty, and renovation of all teaching laboratories. She was an American Council on Education Fellow at Yale University during the 2013-14 academic year; during 2014-15, she served as Acting Dean of MSU s College of Arts & Letters.

Simmons is a theoretical high-energy physicist whose research focuses on the origins of the masses of the elementary subatomic particles, especially the top quark. She is currently studying how physics beyond the Standard Model might manifest in experiments in progress at the CERN Large Hadron Collider. She enjoys teaching physics courses at all levels, from introductory to graduate, and a central tenet of her mission as an educator is to encourage students from groups under-represented in physics to consider studies and careers in the physical sciences. She is a Distinguished Professor in the UC San Diego Department of Physics. After completing her undergraduate degree in physics at Harvard University magna cum laude and being inducted into Phi Beta Kappa, Simmons earned an M.Phil. in physics at Cambridge University as a Churchill Scholar. She returned to Harvard for her doctoral degree and postdoctoral fellowship, and then spent a decade as a professor at Boston University before joining the MSU faculty in summer 2003. She is a Fellow of the AAAS, a Fellow, Outstanding Referee, and Divisional Councilor of the American Physical Society, an Honorary General Member of the Aspen Center for Physics, and has served on the Board of Directors of the Association of American Colleges and Universities. She won the ACE Michigan Network's Distinguished Woman in Higher Education Leadership Award in 2005 and MSU s Robert F. Banks Award for Institutional Leadership in 2013.

Simmons has served as a US Delegate to the International Conference on Women in Physics in 2008 (Korea) and 2011 (South Africa) and has co-organized 2013, 2015, 2017  and 2019 conferences on professional development for women physicists in the developing world at the International Center for Theoretical Physics (Italy). She writes a column Mend the Gap for Inside Higher Ed, addressing issues that bridge the divide between administrators and faculty and was a 2017 and 2018 Top Writer on Quora. Simmons is a member of the Organizing Board of the advocacy group lgbt+physicists, a co-author of the 2016 LGBT Climate Report commissioned by the American Physical Society, and the Past Chair of the American Physical Society s Forum on Diversity and Inclusion.